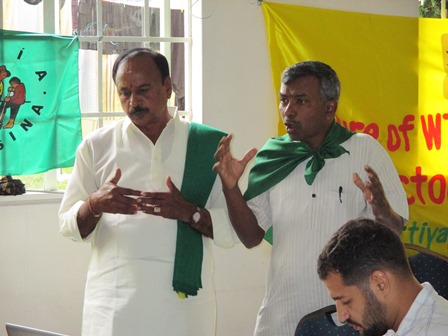 (Nairobi, December 17, 2015) Chamarasa Mali Patil of Karnataka Rajya Ryata Sangh (KRRS) and K. Sellamuthu, president of Thamizhaqa Vivasayigal Sangam, peasant delegates from India shared how under WTO peasants have suffered. Indian peasant communities have been destroyed as a result of cheap imports of oilseeds and rice.

Rakesh Tikait from Bhartiya Kissan Union (India) said that WTO and the opening up of agricultural markets to imports have affected India’s food sovereignty. The country was able to feed itself before food imports surged due to tariff reduction. As a result of the increased agricultural imports which lower local prices many India peasant farmers committed suicides as they could settle mounting debts. Over 300,000 farmers have committed suicides since the inception of WTO.

When India opened up its agricultural markets, Monsanto and other agro-corporates entered too and hoodwinked many peasants to buy toxic agro-chemicals and GMOs. Peasants bought GM seeds such as the Bt cotton which failed to yield promised output. As some peasants had used loans to buy these seeds and agro-chemicals they failed to pay the lenders. This resulted in many peasant suicides.

They plan to block all major roads in New Delhi with tractors to force government to listen to their demands. “We are planning a big demonstration in New Delhi soon if the India government compromises in Nairobi”, says Sellamuthu, president of Thamizhaqa Vivasayigal Sangam.

“Unity among the different farmer unions is very important in this struggle. The government only listens to us when we are united. In future we are going to organise bigger mobilisations targeting foreign embassies in our country against the WTO in solidarity with our fellow peasants” says Chamarasa Mali Patil of Karnataka Rajya Ryata Sangh (KRRS)

In Thailand Barachmee Chaiyarat of Assembly of the Poor (AOP) shared how the rice imports affected small farmers in Thailand, which produces surplus rice. Many small farmers are finding it difficult to continue farming. Since military coup in 2014 AOP members are heavily affected by military suppressions. Farmer suicides are on the rise.  Rice prices halved. Other agricultural produce has also been affected too. The military government is making their life difficult. There is no freedom of assembly. In order to please the international governments, the illegitimate military will accept any deals of WTO at expense of the Thai people.