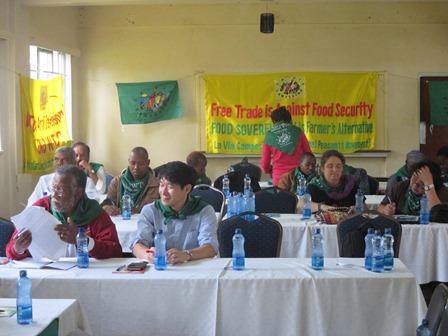 (Nairobi, December 16, 2015) The WTO, an organisation more powerful than national governments and UN institutions and a destroyer of agriculture has been promoting a globalisation for Transnational Corporations (TNCs) and big powers. Under this organisation, no farmer can be a winner. Winners are only TNCs that control world trade. For them production is not for consumption but for trade to make profits. Trade also is about exploiting the poor countries by rich countries. La Via Campesina together with other social movements have led and continue the struggle against this economic injustice.

“To stop them”, says Shushi Okazaki “the role of La Via Campesina is increasingly important. Japan Family Farmers movement, Nouminren, together with La Via Campesina will build a fair and just society based on sovereignty by breaking down a trade system of multinationals: WTO, Trans-Pacific Partnerships (TPP) and Free Trade Agreements (FTA)s. TPP is the worst-ever treaty to completely destroy Japan’s agriculture that has already suffered a lot under WTO.”

In Japan the destruction of agriculture goes beyond the forced 35% tariff reduction on agricultural products under theWTO. It is clear that the TPP will destroy agriculture more and deal a severe blow to the safety of food, health, local economy and employment, infringe on national sovereignty, subject citizens of member nations to rules that are dictated by TNCs.

WTO was on the brink of death until the Bali meeting in 2013 when some attempts were made to resuscitate it by dividing developing countries.  It found new but weak teeth to continue to burden to developing countries and infringe upon their food sovereignty. This is evident in Kenya. The US intentions are clearly to snub any talks on pending preferential treatment and special safeguard mechanism for developing countries. It calls for acceleration to open the agricultural markets and impose its rules on other countries through the WTO and destructive FTAs.

“The real challenge is not only to eliminate poverty but, more importantly, to eliminate the concentration of wealth and power and achieve economic and social justice based on rights. We need the role of La Via Campesina now more than ever in order to strengthen this struggle and to build a society where food sovereignty is realised. Japan family Farmers Movement will continue to fight its government with all force and hand in hand with La Via Campesina, strengthen the global struggle against the WTO, TPP and Transatlantic Trade and Investment Partnership (TTIP)” says Shushi.