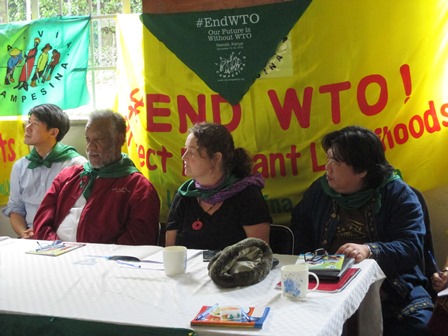 (Nairobi, December 17, 2015) As the wave of big Transnational Corporations (TNCs) sweeps across the global in search of new markets and dominance, small family farmers in the developed countries are being trampled. Agricultural markets are flooded by cheap imports from other developed countries. In the US this has forced thousands of family farmers to change land uses or sell to the government. The government agricultural policies support large farms most of which are part of TNCs value chains. Land concentration is promoted in the US and EU through the biased farm support schemes. Farm support is tied to the size of the farm- is given on per hectare or acre basis. This means large farms receive much more than small farms.

According to Ben Burkett, president of National Family Farm Coalition, agricultural imports from New Zealand (lamb and powdered milk), Brazil (soy beans) and other countries are devastating the rural areas and also lower prices in US. Despite the US support to its farmers, those affected by imports have to prove their case before getting ‘crop subsidy transition assistance’. Not all farmers are able to do so. Some end up selling their land to the government. This land is converted into conservation reserves.

“I was affected by North America Free Trade Area (NAFTA). We used to grow cucumbers and chilli pepper since the 1940s which we sold under a contract. This all changed in 1995 when NAFTA was signed. We lost the contract- the contractor started sourcing from Mexico”, says Ben Burkett, a farmer for life.  Of the 800 farmers who benefited from this contract, only 200 are left. They switched to growing vegetables for fresh markets competing against large corporate farms.  For instance Pacific/Collier supplies over 50% of fresh tomatoes in the US.  The land use change is not easy. Farmers are forced to abandon crops for which they have traditional knowledge and grew over many generations.

He added “Free Trade Agreements and WTO will be the death of agriculture as a way of life in the entire world. Therefore all peasant farmers must unite together in the struggle for life itself”. Consumers increasingly want to know where their food comes from, who grew it and the way in which it was produced. There is a growing awareness about “buy fresh by local in the US”.

“Europe gets a lot of cheap agricultural imports from other countries such as Brazil. We get soy beans for animal feeds. We want to make our own local feed concentrates, not get soy from Brazil which destroys the environment-causes climate change. Our local markets and farmers are affected”, says Marielle De Roos from Norwegian Smallholder Farmer Organisations (NBS).  Only the big corporates benefit under the WTO and FTAs.