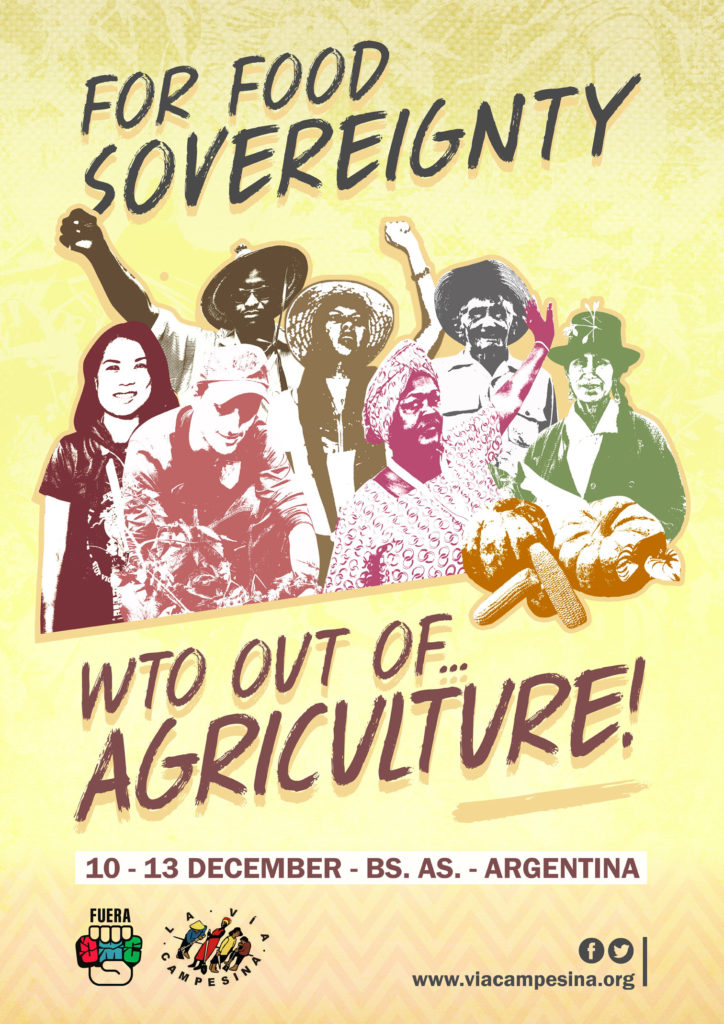 15 November 2017: La Via Campesina is calling upon social movements and civil society organisations of the world to mobilise and organise our resistances against the World Trade Organisation (WTO) and Free Trade Agreements (FTAs), build solidarity alliances and to participate in the People’s Summit “WTO, Out! Building Sovereignty”, from the 11-13 December coinciding with the XI WTO Ministerial in Buenos Aires, Argentina.

A preliminary agenda of the summit is available here.

For the first time since its inception, the World Trade Organization (WTO) is planning to meet in Latin America. From the 10th to the 13th of December, Mauricio Macri’s government will host the WTO’s 11th Ministerial Conference in Buenos Aires, Argentina. Entrepreneurs, ministers, chancellors, and even presidents will be there. To do what? To demand more “freedom” for their companies, more “ease of doing business” for exploiting workers, peasants, indigenous people, and taking over land and territories. In other words, less “restrictions” on transnational wastage.

Since its beginnings in 1995 as derivative of General Agreement on Tariff and Trade (GATTs), the World Trade Organization has promoted the most brutal form of capitalism, better known as trade liberalization. At successive Ministerial Conferences, the WTO has set out to globalise the liberalisation of national markets, promising economic prosperity at the cost of sovereignty. In more or less the same terms, by its “liberalization, deregulation and privatization”, which is called Package of Neoliberalism, WTO has encouraged the multiplication of free trade agreements (FTAs) between countries and regional blocs, etc. On this basis and by making use of governments that have been co-opted, the world’s largest transnational corporations (TNCs) are seeking to undermine democracy and all of the institutional instruments for defending the lives, the territories, and the food and agricultural ecosystems of the world’s peoples.

In the previous Ministerial Conference (MC) in Nairobi in 2015, WTO had made six decisions on agriculture, cotton and issues related to LDCs. The agricultural decisions cover commitment to abolish export subsidies for farm exports, public stock-holding for food security purposes, a special safeguard mechanism for developing countries, and measures related to cotton. Decisions were also made regarding preferential treatment for least developed countries (LDCs) in the area of services and the criteria for determining whether exports from LDCs may benefit from trade preferences.

This year, with Macri Inc. in the Casa Rosada (Government House in Argentina), the coup leader Michel Temer in the Palacio del Planalto (the official workplace of the president of Brazil), and Brazilian Roberto Azevedo as its Director General, the WTO wants to return to the subject of agriculture, to put an end to small-scale fishing, and to make progress with multilateral agreements such as the misnamed General Agreement on Trade in Services (GATS). Notwithstanding the misleading protectionist statements coming from Washington and London, the WTO will meet again to try to impose the interests of capital at the cost of Planet Earth, of the democratic aspirations of the world’s peoples, and of life itself.

During these 20+ years of struggle against the WTO, the world’s peoples have resisted its attempt to globalize everything, including the food and agricultural systems, for the benefit of the TNCs. Our struggles have been the biggest impediment to the advance of the WTO, and there is no doubt that La Via Campesina has played a decisive part. Our resistance to market liberalisation under this neo-liberal regime has continued since the Uruguay round conducted within the framework of the General Agreement on Tariffs and Trade (GATT). Ever since, La Via Campesina has mobilised against almost all of the Ministerial Conferences since Seattle (1999) and Cancún (2003) – where our brother Lee Kyung Hae, holding a banner declaring that “The WTO kills peasants”, sacrificed his own life – and up to Bali (2013) and Nairobi (2015).

This year, from December 10 to 13, an international delegation of La Via Campesina will be in Buenos Aires to participate actively in multiple mobilisations, forums and debates of the organised people, at the Peoples’ Summit “WTO, Out! – Building Alternatives“. We will denounce the WTO as the criminal organization that it is and will raise our flag of Food Sovereignty. We will denounce all governments, which, after having understood that the WTO had been weakened, resorted to mega free trade agreements, bilateral and regional, that threaten to annihilate our food systems, just as the WTO has done in the last two decades.

We are calling upon all of our member organisations – in each and every country – to mobilise during this Peoples’ Summit, identifying the best moment, and best alliances, to denounce the WTO and the numerous bilateral and regional free trade agreements based on our own contexts.

We insist that agriculture should not be part of any of the WTO negotiations!

WTO OUT OF AGRICULTURE!

You can email the details of your solidarity actions to lvcweb@viacampesina.org