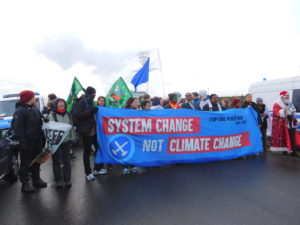 Food sovereignty and peasant agroecology – which should be understood in the context of national sovereignty – are the true solutions to build resilience and resistance.

The transnational corporations responsible for over 70% of the man-made emissions continue to push forward new false solutions to address the climate crisis. Such solutions not only focus on growing their profits but create more conditions to commodify nature, while turning a blind eye to the increasing social and environmental crisis they have created. Today, millions of peasants, indigenous people and fisherfolks are losing their source of livelihood to rising sea levels and adverse weather conditions.

It is clear that capital survives and feeds on chaos and destruction of nature. Human dignity and life are not respected at all. Recent climate disasters in Puerto Rico expose this immoral behavior. After suffering two hurricanes (Irma and Maria), the US administration blocked any form of assistance to rebuild the island, only allowing its corporations.

For Jesús Vázquez Negrón from Puerto Rico, who was attending the people’s mobilizations parallel to the 23rdedition of the Conference of Parties (COP23) in Bonn, climate change is real. “We are here to remind the world that the change must be systemic. That is why the proposal of systemic change proposed by La Via Campesina, a global grassroots movement and alliance, is crucial.”

The peasant struggle is not just about climate resilience – which is an act of resistance in itself. It is also a global fight against the expansion of agribusiness, which relies on free trade agreements. There is an urgent need to critically question the mass production of meat and reduce the import of feed from the global south to Europe.

To make sure they keep growing despite global climate change, transnational corporations have developed their own ways – false solutions such as blue carbon, REDD[1] mechanism and climate smart agriculture.

Another issue that is generally undermined in climate change debates is migration. There are today more than ever before a growing number of climate-migrants. According to Massa Koné of the Global Convergence of Land and Water Struggles – West Africa, the climate and the migrantion crisis are the two sides of the same coin. “…  It is those who try to contain migrations who have also provoked it! It is their false solutions that are taking over our land, disturb our rainfall, that create wars! This is why migration increases everyday”, says Koné.

The good news is that the debates have a strong youth movement that is leading the struggle in various places of the globe, as they are the future of humanity. “We are the present for a better future and we will not give up, but continue to defend the interests of the peasants, the whole society, for a social transformation. We, peasants across the world, firmly reject the industrial model of agriculture which is at the very root of climate change”, says young French peasant Fanny Metrat of Confederation Paysanne. “We are the ones who can cool the planet and feed the world”, she added.

There have been many COPs before and many more will follow, but their impact on public policies is minor. Sustainable development, green economy, REDD are the buzzwords of capitalism being hammered these days in Bonn. But social movements expect governments and multinationals around the negotiating table to deliver real solutions.

To change the system, grassroots and peasant movements have to keep growing and establish more alliances. Our governments do not realize the urgency of the situation but the peasantry suffers from it on a daily basis. Food sovereignty and peasant agroecology – which should be understood in the context of national sovereignty – are the true solutions to build their resilience and resistance.

[1] REDD stands for Reducing emissions from deforestation and forest degradation