Home » Women united for food sovereignty and against violence towards women 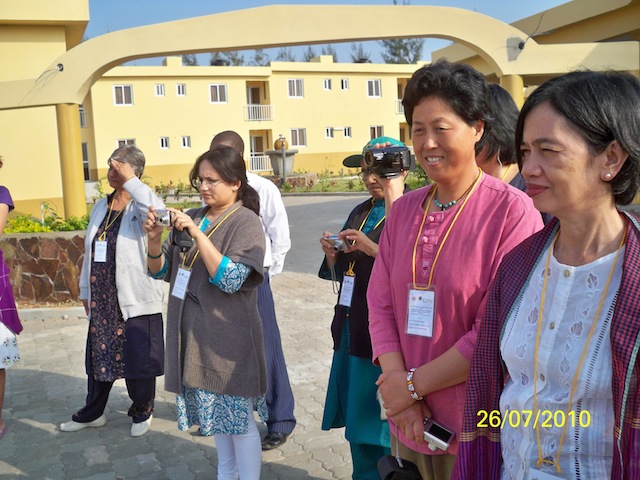 In Maputo, Mozambique, on the occasion of the international seminar on building alliances for food sovereignty and against violence towards women held in Maputo from July 26 to 29, La Via Campesina worked together with World March of Women (WMW), Friends of the Earth Intenational (FoEI) and women of the countryside from Asia and Africa and shared our ideas to plan our work on women.

We are currently witnessing the upholding of ancient forms of violence against women and the reinforcement of new ones. For instance, when Ttransnational companies take over land for the expansion of monocultures, peasant families are driven away. Women become more vulnerable as they can no longer guarantee food for themselves and their families. They often migrate and find precarious jobs with no rights and exploitative conditions.

It is women who suffer due to the effects of climate change, especially as a result of the false solutions proposed such as agricultural monocultures, large hydroelectric dams, nuclear energy, carbon capture and storage, genetic modification and other unsustainable options. Many of these require large areas of land and often lead to violent conflict over land and territories.

The future of humanity is under threat. Industrial agriculture and livestock and the commercialization of the food system, along with the atmospheric contamination caused by these large industries, are provoking the climate crisis. The livelihoods, knowledge and the culture of peasant and indigenous communities are at risk, as is sufficient and healthy food production.

Food sovereignty is the global alternative confronting the capitalist system and the multi-dimensional crisis it has generated: the food crisis, biodiversity crisis, financial crisis, and energy crisis. It is an alternative for society as a whole.

In order to achieve food sovereignty, we commit ourselves to continue our struggle together in order to eliminate all forms of violence generated by capitalist modes of production and patriarchy.

The struggle against violence towards women begins in our hearts and consciences. Putting an end to these forms of violence requires our effort and unity in struggle, as well as our commitment to the construction of a more just society. We will organize various activities to cool down the planet as part of our struggle against false solutions to climate change. Let us unify our wills to build a world without violence.