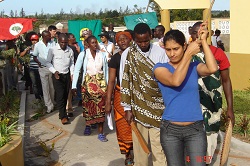 (Maputo, 05 August) – In Marracuene, a district south of Maputo in Mozambique, around 40 men and women activists, peasants and workers of rural social movements, are participating in the second exchange and political education course for members of La Via Campesina from Portuguese-speaking countries.

Inspired by the motto “Educate men and women to win the war and create a new society”1, the course participants are planning to use this training “to break the traditional boundaries that prevent the sharing of their knowledge and their seeds, something that is currently done by multinational corporations, “explains Maria Gorete, one of the teachers and an activist with the MST and La Via Campesina Brazil.

Joao Carlos Palate, vice president of the National Farmers Union of Moçambique (União Nacional de Camponeses, UNAC) said this course is fundamental because it allows the exchange of experiences and strengthens the leadership of the movements. “With the strengthening of our social movements we are going to win the struggle against imperialism. We have confidence that we will achieve victory, “said Palate in his speech at the opening ceremony, held this Wednesday, August 4.

The initiative to organize this training and exchange course came during the Fourth International Conference of La Via Campesina in Brazil in 2004 and was reaffirmed after the completion of a course of this nature held in Maputo in August 2008. This dynamic was seen reinforced during the Fifth International Conference of La Via Campesina in 2008 in Maputo, when technical training and political education was identified as the centerpiece for its development in the world. 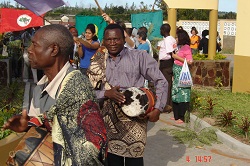 In Maputo, the social movements committed to strengthening the peasant movements in Africa and developing international solidarity with the continent, which has been the victim of exploitation of capitalism.

In partnership with UNAC, the Movement of Landless Workers (MST) of Brazil is co-organizer of this course.

As Maria Gorete explained, “we want to deepen exchanges that we have built over more than a decade with UNAC and so we brought activists from Brazil to get to know the leadership of UNAC and of the other countries of Africa.”

This second course has participants from Mozambique, Brazil, Angola and Guinea Bissau.