Home » Women fight to reclaim and use traditional seeds 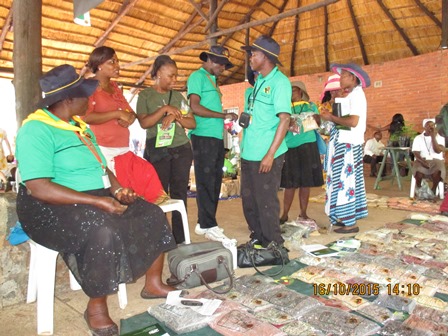 (Harare, October 20, 2015) Women from the Zimbabwe Smallholder Organic Farmers Forum (ZIMSOFF) continuously fight to reclaim and use traditional seeds, and break dependence on commercial seeds. As the world celebrated the World Food Day on the 16th, the international peasant movement, La Via Campesina, on this day, called on its members and allies, and civil society organizations to mobilize and organize actions for Peoples’ Food Sovereignty and against transnational corporations (TNCs). In response, ZIMSOFF organized its member farmers on the 16th and 17th October, to participate in a dialogue and festival respectively where the focus was on traditional food and seeds. They shared the plight faced by many small farmers, particularly women and youth under the current climate and hunger crises.

Over 12 smallholder farmers (from four ZIMSOFF clusters: northern, eastern, western and central) participated in the festival. These farmers, of which 8 were women, were selected from the best farmers, the winners, at ZIMSOFF cluster food and seed fairs, to represent their clusters at the national level. The cluster food and seed fairs were held in August and September this year. They brought their own seeds and processed farm produce to showcase at the national festival. They brought also seeds and processed farm produce randomly selected from other cluster members.

Tendai Chidhakwa, a smallholder farmer from the eastern cluster of ZIMSOFF participated at the just ended traditional and organic food and seed festival held a day after the World Food Day. According to Tendai Chidhakwa “traditional and farmer saved seeds are not bought but exchanged among the farmers and thus are important in building a stronger food sovereignty. Farmers without money can have seeds to grow and feed their families”. With regards to nutrition she said “African traditional seeds are nutritious and good for our bodies; they improve our health.”

Last year 2014, the prices of commercial seeds, mainly maize, increased beyond the reach of most smallholder farmers. A 25kg bag of maize seed increased between $68.00 and $113.00, up from $57.00 and $96.00; while a 10 kg bag between $27.50 and $31.00, up from $21.00 and $24.00. Most media reported that many smallholder farmers were unlikely to buy sufficient seed for 2014/15 agricultural season as a result of these seed price hikes. They said food production was most likely to be affected as area to be planted to maize, the staple food crop in the country, would fall. This prediction came true and most farmers who relied and planted commercial seeds did not harvest enough as a result the drought and reduced area planted. Most parts of Zimbabwe were declared by the drought stricken, requiring food assistance.

However, not all farmers were affected by the price increases. There exist isolated but significant groups of smallholder farmers who have been using Indigenous Knowledge to save traditional seed for crops. These farmers have been and are still growing a wide range of traditional seed varieties and Open Pollinated Varieties (OPVs) (maize, sorghum, millets, groundnuts and other pulses) which have tied their communities together helping to preserve their culture and ensure food security and food sovereignty. ZIMSOFF farmers are part of this group of farmers. 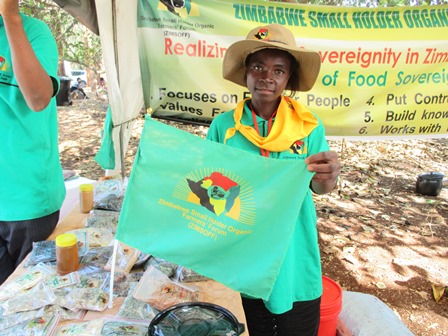 “I brought seeds to showcase that it is possible to grow good seeds using organic manure, organically. There is no need for fertilizers which most farmers cannot afford. Last year l harvested enough to feed my family, says Mrs Chidhakwa. Her story was echoed by all the ZIMSOFF farmers participating at the festival. Their seeds were able to withstand weather shifts which resulted in longer dry spells during the growing season. The women believe that their traditional seeds, not the commercial seeds, are key to building and strengthening food sovereignty under climate change, thus should be reclaimed and guarded against any form of commercial piracy. They said seed is the foundation of life, for without seed, there is no food and without food there can be no life.

ZIMSOFF has been participating in the national traditional and organic food and seed festival for the last three years. This year many people visited the ZIMSOFF stands at the festival, some of them expressed interest to collaborate with the organisation and learn from its member farmer’s experiences. Other smallholder organizations participating at the festival also visited the stands and exchange knowledge on agroecology and organic farming. They also exchanged seeds. According Tendai, more seeds were exchanged this year compared to the other years. The visitors to the festival also bought seeds and other processed farm produce such dried vegetables, ground sorghum and millet meal.

According ZIMSOFF leadership “smallholder farmers should be allowed to practice the age old seed preservation, growing and exchange, to foster seed variety diversity, greater within variety genetic diversity, and make smallholder farms more able to adapt to changing climatic conditions than homogenous commercial agriculture”. Such a broad vision for farmer saved seeds is being propagated to resist the multiple threats to the farmers’ seeds not just in Zimbabwe but globally as a result lack of recognition of the value of farmer saved seeds. ZIMSOFF thus has joined hands with other organisations at the national level to create a partnership that responds to contextual factors on seed. This collaboration on seed is the first of its kind.