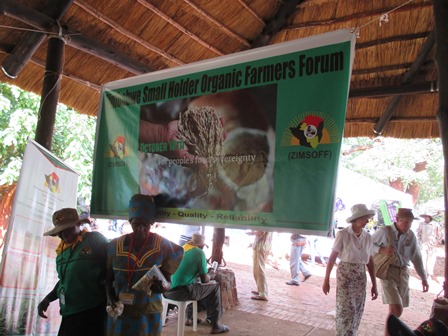 (Harare, October 19, 2015) Zimbabwe Smallholder Organic Farmers Forum (ZIMSOFF) participated in the 2015 Traditional and Organic Food and Seed Festival held in Harare on October 17th. Over 12 ZIMSOFF farmers participated in the festival to showcase farmer saved seeds, and to exchange information with other farmers and create awareness among urban consumers on traditional foods and seeds. Memory Mutema, a young woman farmer from Chieha Smallholder Farmers Organisation in the eastern cluster is one of the farmers who participated this year. She grows small grains to feed her family and to earn an income. “Small grains are an important food crop,” says Miss Mutema.

In Zimbabwe, women play a key role in ensuring household and national food sovereignty. They produce over 70% of diverse agricultural food crops consumed nationally. Small grains are part of these food crops. They don’t require the use of agro-chemicals and fertilisers and most are drought resistant. Thus small grains are considered an ideal food crop to build resilience as we adapt to a changing climate.

According to Elizabeth Mpofu, the ZIMSOFF Chair and LVC General Coordinator “Small grains are long lasting seeds. As the custodians of seed we women have realised that without our small grains hunger will remain a threat to the lives of all. We also recommend and promote the processed products from all our small grains for better nutrition. They are easily grown even in this climate crisis where we are receiving little rain, small grains never go wrong – you produce enough for the family and for the market”

Miss Mutema grows small grains such as sorghum, pearl millet (mhunga) and finger millet (rapoko). “In 2013, l harvested 3 tonnes of sorghum most of which l sold to the Grain Marketing Board (GMB) for about US$1,200.00 per tonne. Sadly, l have not being paid for this produce,” say Miss Mutema. The GMB is a parastatal that buys a wider range of farm produce from farmers. The parastatal has been experiencing financial challenges since mid-2000 and this has affected its ability to make timely payments to farmers. Such delays have affected smallholder farmers the most as they don’t have access to credit and thus rely on income from farm produce sells to support their families and farming activities including building their asset base. Memory hopes that one day she will get the money.

The harvest from small grains is certain but weather variability affects the overall yield. “In a good year, if adequate rain falls,” says Mutema, “l harvest over 300kgs of pearl millet, 150kgs of finger millet.” She does not sell the millets but feeds her family. Some of it she makes cakes and scones. Memory has over the years perfected the art of making cakes using flour from millets. The finger millet is processed into flour using a grinding stone. The pearl millet is first roasted and ground using a grinding mill (chigayo). She also uses sweet potatoes to make cakes and scones. The sweet potatoes are first soaked in water over night, peeled and sun dried before grinding into flour. 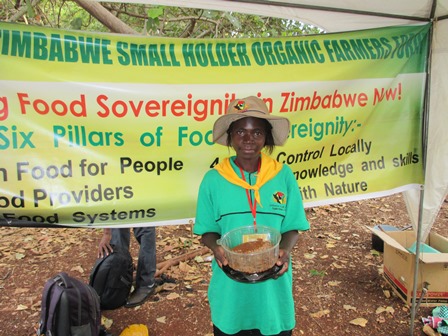 She has managed to develop and sustain a good market for the cakes and scones sold locally mainly to elementary schools. She is very popular with local schools and the demand for her cakes is high particularly at the end of year when infants graduate from elementary schools. “During this period, l sometimes sells over 10 cakes a day at US$4.00,” says Miss Mutema.

At the festival, most participants and visitors liked her cakes and some even promised to establish contact with her to build a big market for the cakes and some to learn how to make cakes.