We, representatives of 30 organizations of pastoralists, indigenous peoples, smallholder farmers and NGOs from 26 countries in both the North and the South came together in Wilderswil at our “Livestock Diversity Forum: Defending Food Sovereignty and Livestock Keepers’ Rights”. We met in parallel with FAO’s International Technical Conference on Animal Genetic Resources held in Interlaken. 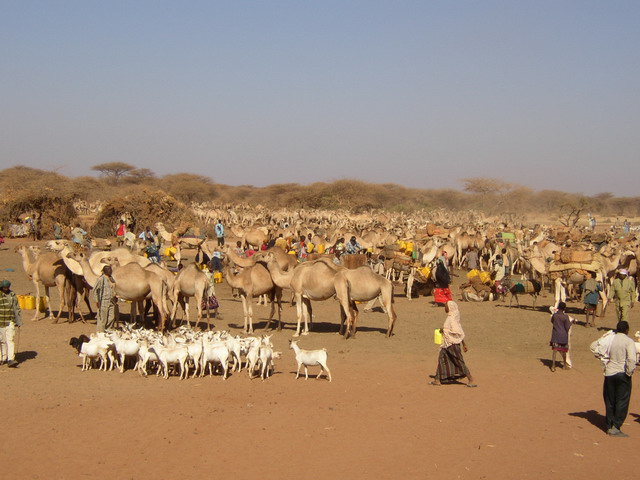 We are here to fight for our rights as livestock keepers. We realize that we are just a small fraction of all the organizations that exist throughout the world. But we recognise that our struggle is common to the social organisations of nomadic pastoralists, herders, indigenous peoples and small farmers in both the North and South. Our main purpose of coming together was to further strengthen our movement and deepen our analysis and collaboration.

How industrial livestock production is advanced

The industrial model is imposed on us through land grabs and evictions based on systems of private property ownership, forced sedenterisation policies and disruption of pastoral migration routes, liberalization of markets, contract farming, large scale economic development projects such as mining (and their consequences such as the privatisation of water resources by transnational companies), agrofuel production schemes, and even through policies that aim to conserve nature through national parks and protected areas. In recent decades, it has also been achieved through the imposition of trade rules that enable dumping, which destroys local markets, and that force us to produce food based on the industrial model for export.

The policies of structural adjustment and the privatization of land, water and veterinary services and the drive for proprietary technologies, such as cloning and genetic modification, are other tools used to destroy our way of life. Tragically, these policies have led to an increase in competition for the appropriation of natural resources which has resulted in a dramatic increase of violent conflicts, wars and occupations.

This model of production is detrimental to health of both humans and livestock. Marketing strategies are used to encourage high and unhealthy quantities of livestock products for consumption. Health measures that facilitate the global trade of industrially produced livestock are destroying our local small-scale production. We cannot accept that sanitary and hygiene regulations should be defined under the control of the World Trade Organisation responding only to the demand to liberalise markets. The standards of health and quality of livestock products must respond to the needs of consumers and not the needs of industry.

The consequences of industrial livestock production

We note the following consequences in our communities: loss of small and family based production; smallholder bankruptcies and suicides; economic dependency, including through importation of feed; destruction of environment; young and new herders cannot enter into production because of economic barriers; breakdown of social relations; government research and breeding policies geared towards “high productivity” with the indiscriminate introduction of new breeds which have caused us to lose our local breeds.

Towards Food Sovereignty and collective rights

We affirm that it is not possible to conserve animal diversity without protecting and strengthening the local communities that currently maintain and nurture this diversity. We want livestock keeping that is on a human scale. We defend a way of life that is linked deeply with our cultures and spirituality and not just aimed at production. We are building our capacities to organize ourselves to counter the pressure to conform with the industrial model. We are adopting the framework of food sovereignty which was developed by small farmers’ movements and others, who face many similar problems stemming from industrial agriculture, and which is already starting to be recognized by several governments. We will continue to further develop alternative research approaches and
technologies that allow us to be autonomous and put control of genetic resources and livestock breeding in the hands of livestock keepers and other small-scale producers. And we will organise ourselves to conserve rare breeds.

We are committed to fighting for our lands, territories and grazing pastures, our migratory routes, including trans-boundary routes. We will build alliances with other social movements with similar aims and continue to build international solidarity. We will fight for the rights of livestock keepers which include the right to land, water, veterinary and other services, culture, education and training, access to local markets, access to information and decision making, that are all essential for truly sustainable livestock production systems. We are committed to finding ways of sharing access to land and other resources
with pastoralists, indigenous peoples, small farmers and other food producers according to equitable, but controlled, access.

Ownership, knowledge and innovation at the community level are often of a collective nature. Therefore local knowledge and biodiversity can only be protected and promoted through collective rights. Collective knowledge is intimately linked to cultural diversity, particular ecosystems, and biodiversity and cannot be dissociated from either of these three aspects. Any definition and implementation of the rights of livestock keepers should take this fully into account. It is clear that the rights of livestock keepers are not compatible with intellectual property rights systems because these systems enable exclusive and
private monopoly control. There must be no patents or other forms of intellectual property rights on biodiversity and the knowledge related to it.

States should recognise the customary laws, territories, traditions, customs and institutions of local communities and indigenous peoples, which constitute the recognition of the self-determination and autonomy of these peoples. Governments should accept and guarantee collective rights and community control over natural resources, including communal grazing lands and migration routes, water, and livestock breeds. Governments should engage in creating legally binding international instruments which would oblige States to guarantee the full respect of these rights.

The FAO Global Plan of Action

The FAO Report on the State of the World’s Animal Genetic Resources contains a good analysis of some of the key causes behind the destruction of the biodiversity of domestic animals and the undermining of the livelihoods of local communities that nurture this diversity. The Report squarely points to the industrial livestock system as one of the main forces behind this destruction. However, in the Global Plan of Action there is nothing that addresses these causes. It is totally unacceptable that governments agree on a plan that does not challenge the policies that cause the loss of diversity. Nor are governments even committing themselves to make any substantial financial engagements to implement their own Plan.

Defending livestock diversity is not a matter of genes but of collective rights.

The social organizations of pastoralists, herders and farmers have no interest in participating in a plan which does not address the central causes behind the destruction of livestock diversity but rather provides crutches / weak support / for a collapsing global livestock production system Because the Global Plan of Action does not challenge industrial livestock production, we reinforce our commitment to organise ourselves, to save livestock diversity and to counter the negative forces bearing on us. However, we remain open and willing to participate in any useful follow up that might be facilitated through FAO.