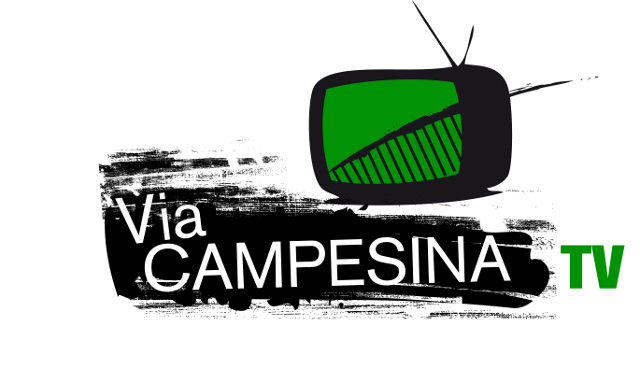 The mirror of our struggles

(March 8, 2013) Viacampesina TV is a mirror of our daily lives, our dreams and our struggles. La Via Campesina took the opportunity of its 20th anniversary to launch a new website, full of voices, faces, people and music. It gathers both audio-visual and cultural creations of the peasant organizations, whether members of La Via Campesina or not, with material produced by friends, allies, or occasionally by mainstream media.

VIACAMPESINA TV will take a crucial step that differentiates us from other media in terms of gender. Globally, only 24% of the people mentioned or giving their opinions in the news are women, while more than three quarters of people in the news are male. Women continue to be consulted only in the category of “ordinary” people; men predominate as specialists.

In that sense, as VIACAMPESINA TV we will have a firm commitment to make visible the role of women in building the movement, in their struggles for food sovereignty, violence against women in the private and public sectors, and the construction of a new economic model of production and consumption. That’s why we considered the International Women Day, this day of mobilization and demands to officially launch our VIACAMPESINA TV because in order to be able to say “our word”, we will have to build it together.

We all–women and men–have the challenge of communicating in a way in which we make women visible as protagonists of the struggle, of political education, and of transformation. Besides this, we will be working with non-sexist language and language that does not objectify women, in a way that does not reproduce the patriarchal vices that the mass media often uses.

Watch videos on the women struggle!

How to do you send audiovisual material to us?

Upload it to Vimeo, YouTube, or another system. And send the link to us at the following address: lvc-communication@viacampesina.org

All material will be “Creative Commons” (can be used freely for non-commercial purposes). You do not have to be a professional filmmaker, but must be willing to change our food system. Contribute to the creation of different videos about struggle in the world!

The material found on ViaCampesina TV is not the official voice of La Via Campesina, but a more open space composed of sounds and images of the broader movement for food sovereignty. The position papers, press releases and other articles of La Via Campesina remain at www.viacampesina.org