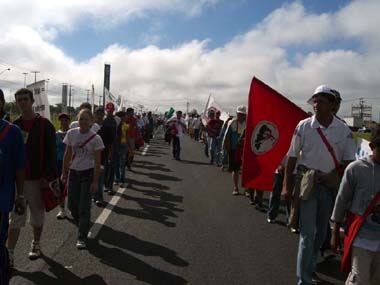 GMOs are poison. Monsanto is a murderer.  You are standing in our way, in the way of Via Campesina.” This is how delegates participating in 3rd Meeting of the Parties to the Cartegena Protocol for Biosecurity (MOP 3) were greeted by more than 1500 members of Via Campesina at the Expo Trade Park in Curitiba.  The social movements formed a walkway in front of the park on João Leopoldo Jacomel Avenue, holding flags from the Landless Rural Workers Movement (MST), the Movement for People Affected by Damns (MAB) and Via Campesina International.  “We question the marketing of GMOs and seeds that are increasingly controlled and patented by the multinationals. This is a question of our food sovereignty,” stated Joceli Andrioli, from the national leadership of MAB.

The objective of the demonstration is to pressure the countries participating in the MOP 3 to include the term “contains GMOs” in article 18.2 A, which deals with the identification of GMOs in international trade and took effect this year.  This position is contrary to that of the Brazilian government, which wants a period of four years to adapt to the new rules.  While the majority of the countries participating in the MOP 3 is in favor of using the terminology “contains GMOs,” Paraguay and Mexico have shown they are against the proposal.  New Zealand has not demonstrated where they stand, but that country, along with Brazil, was against using the language “contains GMOs” during last year’s conference in Canada.

According to the MST, MAB and Via Campesina, the 4-year waiting period proposed by the Brazilian government would give companies enough time to develop and consolidate their research on Genetically Modified Organisms (GMOs).  Via Campesina’s proposal is based in the defense of native seeds, traditional peasant knowledge and research in agroecology.