Home » Via Campesina at the Human Rights Council 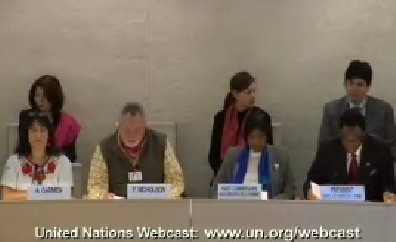 PAUL NICHOLSON, of La Via Campesina, said this was an important opportunity to place the realization of the right to food, to be a fisher, a farmer and a herder, in the context of human rights, and not just in the context of the global economic chain. The causes of the crisis showed that 70 per cent of hunger was rural, and was primarily due to the export and industrial modes of production, and the privatization of market control, which were instruments that multinational corporations controlled leaving prices in speculative hands, and resulting in a high price for the consumer. Ongoing destruction of local food production was a consequence of neo-liberal policies forced upon countries through the World Trade Organization, the World Bank and the International Monetary Fund, in particular, policies that promoted the import of cheap food and the privatization of natural resources. Those policies were driven at the global level which had direct consequences at the local level. Transnational corporations took over the land and imposed industrial food and agro-fuel production, expelling peasants from their land, turning them into slum dwellers and exploiting workers on transnational plantations.

This crisis was now entering a new phase which impacted social and environmental realities. After all the summits and conferences on the right to food and the elimination of hunger, what was really needed was a change in policy on the right of peasants and consumers, stressed Mr. Nicholson. Water was a public good and seeds should be in the hands of farmers. Policies needed to be based on food sovereignty, which meant a genuine agrarian reform through a re-distribution of land towards landless peasants as well as access to other productive resources, among other things. There should be a strengthening of public policies, and Governments should avoid all speculative activities and negative effects of transational corporations on peasant based sustainable agriculture. Peasants should also be protected against the aggressive corporate model of production. The recognition of peasant rights was a fundamental starting point to resolve the struggle against poverty and hunger. Without an international convention on the rights of peasants the realization of the right to food could not be fully realized.