As extreme industrialization and capitalist overproduction demands the exploitation of more water resources everyday, access to water resources has become a major source of political conflict. States, multinational corporations and private interest groups established World Water Council (WWC) to commodify and commercialize water resources, and to maximize potential profit. As it is known, World Water Council is an intergovernmental institution that is sponsored and supported by multinational corporations. Yet it is the World Bank and water monopolies which are dominant in the Council, and the Council is striving to ensure that the logic of profit is determining the direction of water`s flow. 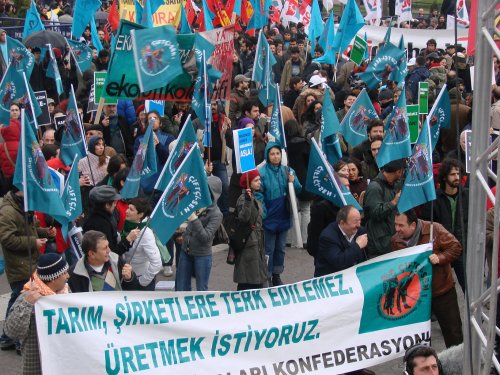 The 5th World Water Forum will take place on 16-22 March in Istanbul.

At the moment in Turkey, legislation is being prepared which would give the rivers, lakes and ponds to corporations. In other words, water resources themselves may be transferred to the corporations, which until now only ran water distribution services. This is a new phase in the privatization of water. Therefore the 5th World Water Forum that is going to take place in Turkey is extremely crucial and this move of water corporations must urgently be stopped.

The United Nations and the World Bank consider water to be a need rather than a right. This is a crucial difference. The moment water is defined as a “need” rather than a “right”, it becomes possible to commodify it and make it subject to trade. A second aspect of global water politics is that demand management is proposed rather than supply management in the global management of water resources. In other words the privatization of the management of drinking water,domestic water and irrigation water is being opened up for discussion.

As an inseparable component of social life, water can not be left to the property of persons or institutions including capitalist states themselves. It must be recognized that water belongs to the nature that humanity itself is also a part of. Therefore we demand that only those who accept water as a basic condition of the survival of all living organisms determine how and under which circumstances water can be used by peoples, animals and plants, and not those elected bureaucrats and/or owners of private interests who claim water can be used for capital accumulation.

To this end the Turkish Farmer Unions’ Confederation Çiftçi-Sen, member of Via Campesina, along with more than 100 other forces of social opposition who defend the right to water should exist formed a platform called No to Commercialization of Water in order to struggle against the World Water Forum. To overcome the corporate interest and demonstrate peoples’ stance on the issue, we collectively work to organize a massive manifestation on March 15th in Istanbul to protest against the World Water Forum. The manifestation will be followed by a set of week long activities, from demonstrations to speeches, workshops and panels that aims at casting a shadow on the WWC.