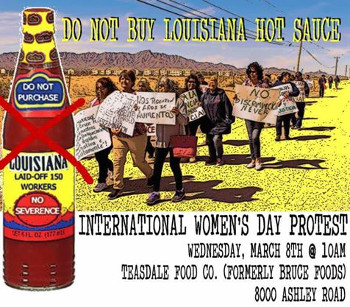 El Paso, Texas: This Wednesday, March 8, on International Women’s Day at 10am at the former Bruce Food Corporation employees are gathering at the location of the Teasdale Foods Co, (Formerly Bruce Foods) 8000 Ashley Rd. to stand against the inappropriate treatment and firing of the Bruce Foods employees. The majority of this group of discarded workers- after so many years of exploitation- are women, some of them heads of household who suddenly lost their income to support their families. The public and the media are invited to join us to report this gross injustice against food workers and their families.

Bruce Foods Corporation in El Paso Texas has laid off over one hundred and fifty senior employees from its El Paso plant located at 8000 Ashley Rd. which intersects with Dyer Street in Northeast El Paso. Workers from the plant in Northeast El Paso were dismissed in May 2016 and reports from Bruce Foods official state that the layoffs are due to the acquisition of the company by Teasdale Food Co. Many senior employees- now jobless -are forced to find new employment without severance from Bruce Food Corp. “The layoffs are due to Louisiana-based Bruce Foods selling its Mexican foods brands to California-based Teasdale Foods, the company reported in a layoff notice in late February to the Texas Workforce Commission.”

According to the state agency, Texas Workforce Commission, the laid-off employees were not given the opportunity to reapply for the positions at the same rate of pay as the date of separation. We are asking that if you have any Bruce Food products in your pantry, to bring them out to the site of the protest and dispose of them properly.