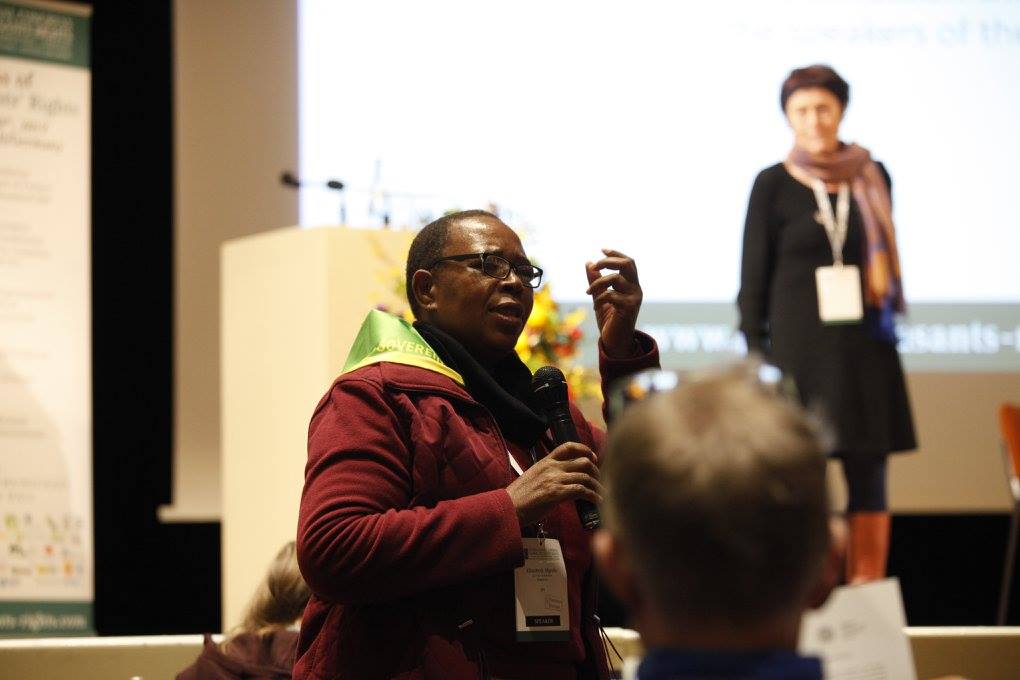 Opening speech by Elizabeth Mpofu (General Secretary of La Via Campesina) of the Peasants’ Rights Congress in Schwabisch Hall, Germany on March 8

The need for a UN Declaration on the Rights of Peasants and other People Working in Rural Areas is all the more urgent and evident in the 21st century. Despite years of campaigning for a better recognition and protection of the rights of peasants, displacements and criminalization continue affecting hundreds of thousands of peasants globally.

Hunger and malnutrition, unemployment and poverty all have something in common; they are more prevalent in rural areas and the countryside. Because of this, most people coming from the countryside, have been exploited (policies forced upon them with limited consultation and participation), dispossessed, displaced, criminalized, brutally treated by those in power and the rich, sometimes taken to court and/or killed for defending their rights related to natural resources, values and culture. Such injustices in most cases have gone unpunished or reported. Laws or political concepts have been made to sanitize and sanctify social injustices. The future UN declaration on the rights of peasants and other people working in rural areas will contribute to solve these problems by recognizing rights to land, water, seeds and other natural resources and stressing the importance of improving access to productive resources and investment in appropriate rural development. This will be a milestone for peasants and rural people all over the world.

Agro-fuels, GMOs, climate smart agriculture are put on the table as a solution to the current climate, food and economic crisis. It opens further the doors for the expansion of industrial agriculture and the exclusion of peasants. The primary role of agriculture is to produce food, not agro-fuels and commodities. Our struggle is for the recognition and acknowledgement of Peasants’ Rights, to achieve both equity and equality, socially, economically and ecologically.

Globally, millions of peasants have been illegally evicted from their lands to make way for “modern agriculture”, agro-fuels, forests (REDD+ for carbon trading) and other natural resources (water), and many other fictitious commodities created for profits by transnational corporations and elites. This has not only affected peasants but also many indigenous peoples. In Africa we see an increase in the erosion of peasants’ rights to seeds and land and access to water in general. These were initiated following the global food crisis by various actors, such as the G8 New Alliance for Food Security and Nutrition in Africa (NAFSN), the harmonization of seed regulatory systems by Common Markets for Eastern and Southern Africa (COMESA) and Southern Africa Development Community (SADC) and the Alliance for Green Revolution in Africa (AGRA). There has been visible widespread land grabbing by foreign interests in many African countries which led to dispossession and displacement of hundreds of thousands of rural peasants. The less visible is the on-going reforms of Seeds Acts and policies to align them to the International Union for the Protection of New Varieties of Plants (UPOV) 1991 to promote big seed industries and to move towards criminalizing peasant saved systems, undermining the rights of peasants.

The rising influence of TNCs in global politics is affecting many of the rights held by peasants: rights to participation and information, safety and health, work, decent incomes and livelihoods, access to justice, life, liberty, physical and personal security and free movement. States must respect, protect and fulfil the rights of peasants and other people working in rural areas. In this particular aspect, we need States to be present both in their territories and also extra-territorial. We need our government to protect peasants and other people working in rural areas- so that individuals, organizations, TNCs and other businesses do not negate our rights.

We see the capture of public policies and the promotion of Free Trade Agreements (TTIP, CETA, TTP, EPAs, RECPs) as the attempt to dominate and monopolize new markets for profits. Neither nature nor humanity are respected but rather are destroyed and exploited for profit maximization. Last year criminalization in the form of continued threats, abductions, torture, persecution, illegal evictions and killings in a number of countries such as Honduras, Colombia, and Brazil, among others, were prevalent. Thus, millions of affected people leave their territories and migrate to developed industrial countries.

We promote a model based on Food Sovereignty and support for agroecological peasant agriculture as a solution to food, climate and social crisis. Why is big capital investing billions of dollars in technologies (toxic agro-chemicals and fertilizers) which we all know cause harm to humanity and the planet? Why are land and natural resources from peasants taken away to produce for export? Such violations are mainly led by capitalist interests. Transnational companies keep violating basic rights with impunity while people struggling to defend the rights of their communities continue to be criminalized, at times killed. We as La Vía Campesina, together with allies, continue to engage and lobby our respective governments and the UN to ensure that such violations receive urgent attention.

The stage we have reached is a critical milestone in the long road towards the creation of an international legal instrument protecting peasants’ rights. After discussing it internally for several years, La Vía Campesina submitted a first proposal in 2008 to the UN Human Rights Council (UN HRC) so that the rights of peasants- men and women- are formally recognized. This includes the right to life and adequate standards of living, the right to land and territory, to seeds, to information, justice and equality between men and women. Using the UN human right mechanisms is seen by the international peasant movement as a strategy to legitimize the peasant’s struggle and to support local struggles everywhere in the world. The UN Declaration on the Rights of Peasants and other People Working in Rural Areas will provide a new tool for peasants to defend their lives and their land. We also need to mobilize support for the UN Declaration on peasant rights process to achieve some of these desired goals. The Declaration will ensure and reinforce the interpretation of the implementation of human rights in relation to peasants whose specific rights are insufficient and inadequate in existing legal instruments. Today, March 8th, peasant women are also mobilizing all over the world to stop violence on our bodies and on our territories and for the recognition of our rights. Peasant women are the main producers in the world and therefore this declaration is especially important for us.

The plight for further protection of the rights of peasants has been a movement-driven process, with La Via Campesina and peasants, fisher folk, indigenous, pastoralists, rural workers, women, and youth organizations at the forefront. This is a demand from people all over the world. In achieving this, we hope to solve current realities, from hunger, malnutrition to rural development. In championing the rights of peasants and other people working in rural areas, humanity also wins.