Home » UNFCCC: Selling off the future of Humanity

Statement of La Via Campesina

A delegation of small farmers and peasants from Africa, Asia, Europe and Latin America has been observing this week the climate negotiations of UNFCCC in Poznan (COP14).

We are shocked by the level of corruption that UNFCCC has reached in allowing corporations to take over the political process of climate negotiations. Instead of tackling climate changes, what is being discussed in Poznan is how to create business opportunities in the face of a looming global disaster. 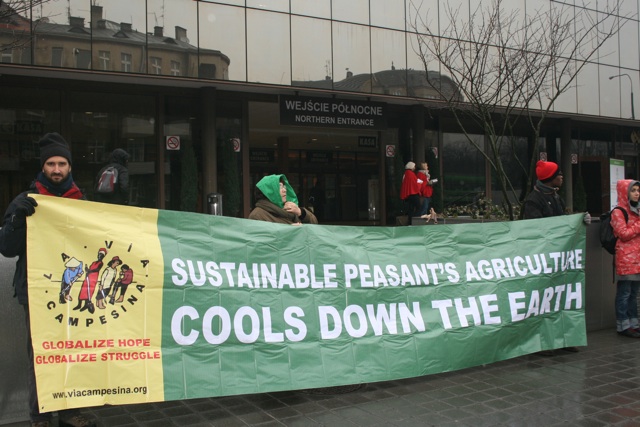 Carbon-trading and offsetting mechanisms produce no reduction of carbon emissions, but create new markets for the benefit of capital and allow industrialized countries to continue to pollute as before.

A member of the delegation, Mr Sarwadi, is part of a peasant community in Indonesia whose land has been taken over by a consortium of environmental NGOs and private interests in order to develop tree plantations. If the Reduced Emissions from Deforestation and Degradation (REDD) – one of the many carbon-trading mechanisms involved – is adopted, thousands of communities all over the world will face similar abuses.

We fear that an agreement based on these mechanisms might have impacts as dangerous as a WTO agreement.

This worrying situation calls for a stong reaction from social movements and peoples’ organisations all around the world. 2009 will be decisive. In order to bring radical changes to these negotiations we call for mobilizations all through the year and particularly in December 2009 when COP 15 will meet in Copenhagen.