Poznan, 11 December 2008
Sarwadi Sukiman, a small farmer from Sumatra (Indonesia) is currently sharing his experience in Poznan during the United Nations climate talks, as part of the Via Campesina delegation. His story shows what happens when plans such as REDD (Reducing Emissions from Deforestation and Degradation) are implemented and what impacts they have on small farmer’s lives. REDD is a new mechanism negotiated in the United Nations Framework Convention on Climate Change (UNFCCC) that provides funding to developing countries to protect forests in order to capture carbon and stabilise the climate. This carbon trading mechanism is getting a lot of international support at the Poznan conference. However, the real impact of such programmes on peasants and indigenous peoples is disastrous. 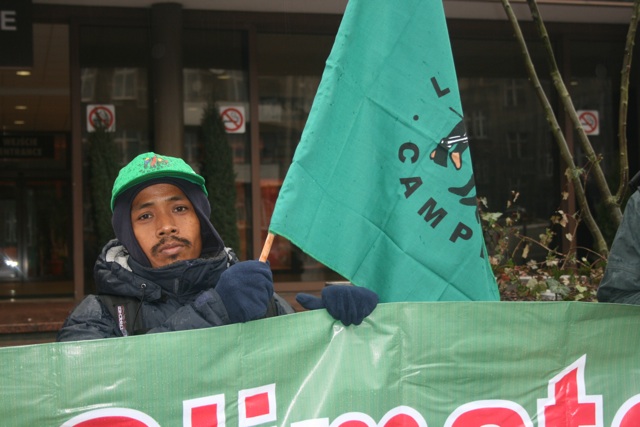 Sarwadi comes from Tanjung Lebar village in Muara Jambi regency. In his area, during the eighties, the development of industrial forest exploitations (for timber, paper…) stole the forest areas from indigenous people. Private companies logged forests to exhaustion. When their concession from the government had expired, the companies went away, leaving behind a devastated area.

In 2002, when the concession had expired in Sarwadi village forest, the land remained barren. Peasants and indigenous people reclaimed it to produce food such as rice, beans and fruits. 1500 families organised in the Indonesian Peasant’s Union (SPI) occupied an areas as wide as 101.365 hectares, where they tilled the land, they built their houses, and created their territories and communities.

Unfortunately, some local and international environmental NGOs established a company named PT Reki who asked the government the permit to use this area for ecosystem restauration. This consortium of NGOs consists of Yayasan Burung Indonesia, Royal Society for the Protection of Bird (RSPB), and Bird-Life International. They received the permit to manage this areas for 100 years (1).

When the company took control over the area, peasants and indigenous people where kicked out of their land, they were intimidated, arrested and interrogated. They were forced to sign a letter where they agree to leave the area and to never come back again. Some peasants were sent to jail and then released. One of them was detained for 6 months for defending hit community’s land.

On November 2, 2008, The Prince of Wales was invited to Sumatra to see the reforestation efforts made by the Indonesian government. PT Reki became one of the places visited by Prince Charles in his campaign to save the rain forest. Using the large media coverage of this event, Dieter Hoffmann, head of the international program of Birdlife International, announced that the company was now exploring the opportunities of benefiting from REDD, the scheme negotiated during Bali Conference on Climate Change in December 2007. He said that if developed, this particular forest in Jambi province could absorb as much carbon as the annual emissions of Manchester. (2)

Sarwadi along with the other farmers members of Via Campesina currently in Poznan denounce projects such a REDD. This new scheme allows companies to prevent family farmers to use the land to produce the food that is needed to feed their communities and their countries. Deforestation, which is one of the main causes of global warming, is not made by peasants and indigenous people, but by large companies that are given the right to commercially exploit the forest. Therefore, forests should not be managed industrially by transnational companies. They should be used by villagers who can manage them in a sustainable way.

The Via Campesina delegation in Poznan is shocked to see that the climate talks are giving so much attention to the REDD initiative. It means that the debate is shifting from the obligation of developed countries to reduce their emissions to the obligation for developing countries to sink carbon. The main polluters would simply send some funds abroad and continue business as usual.
The peasants of Via Campesina believe that instead of getting lost in carbon trading schemes, the conference should focus on implementing new initiatives aiming at changing the model of production. Local production and people based protection of resources should be encouraged because it uses less fossil energy and it maintains livelihoods and local communities. Small farmers around the world defend food sovereignty as a way to overcome the climate crisis. It is the people’s right to define their own food policies, with a priority to local food production and sustainable small scale agriculture.