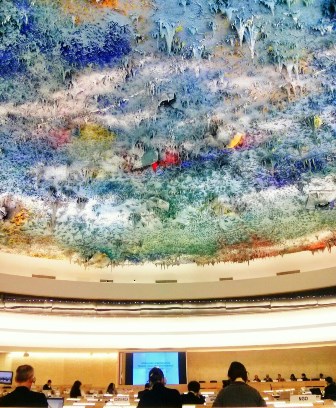 (Switzerland, Geneva, February 6, 2015) The United Nations (UN) 2nd special session on the rights of peasants and other people working in rural areas was held in Palais Nations, Geneva from 2-6 February 2015.

Member states, UN bodies and peoples’ movement from all over the world participated in the session. La Via Campesina, the initiator from grass-roots, sent delegates from Africa, Asia, Americas and Europe. Other organizations of mobile pastoralists, fisher people, women and NGOs were also present.

The reason for this 2nd session was the UN Human Rights Council resolution 26/26 of 2014. The resolution gave a clear mandate to the intergovernmental working group to negotiate, finalize, and submit to the Council a draft UN declaration on the rights of peasants and other people working in rural areas. This process inside the UN has been a long struggle by La Via Campesina for almost 14 years.

In the session, the Chairperson-rapporteur, Angelica Navarro from Bolivia presented a draft declaration (click here to read the draft Declaration). Member states, UN bodies and organizations gave their inputs and comments during the session. Some of the comments focus on the contents, but some question the process. United States, European Union, Japan and South Korea were among the countries reluctant to negotiate for a UN instrument on the rights of peasants and other people working in rural areas.

Henry Saragih from Serikat Petani Indonesia says, “In general we welcome the new text because it addresses the main problems that peasants are facing and it includes the key rights that should be recognized and strengthened.”

While Genevieve Savigny from Confederation Paysanne comments, “We welcome that now in the declaration women are taken into account and very visible.”

The draft declaration will be negotiated at the 3rd session, possibly to be held in 2016. Member states and participants agreed to continue the negotiation process within the UN. On Friday (6/2), at the end of the session, the conclusion and report were adopted —documents to be available for public later.