(This article originally appeared in InTheseTimes on 14 September 2017).

by Rafael Soriano and Débora Nunes 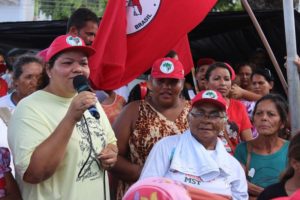 Brazil is facing a profound political and economic crisis since a coup d’etat overturned Dilma Roussef’s government in March of 2016. The new government is unrolling austerity policies that are eroding working families’ political gains by dismantling labor protections and social services and unleashing human rights abuses, including escalating assassinations of peasants and indigenous people. This political context—which shares characteristics with the U.S. climate under Donald Trump—is defined by a crisis of capitalism that resurfaced with the economic meltdown in the Global North that was initiated in 2008.

In this interview, Nunes reflects on the danger and potential of this current moment, highlighting opportunities to build alternatives to capitalism as the current economic system flounders. Nunes underscores that people in Brazil “have great challenges to face the coup and its consequences,” and it is necessary to “better communicate and organize the masses.”

Rafael Soriano: What are the current challenges in the struggle for access to land, and against the concentration of land in few hands, in Brazil after the 2016 coup?

Débora Nunes: The issue of access to land in Brazil by rural families originated a long time ago, and until now it has not been solved. In fact, the contradictions created by the concentration of land ownership in a few hands have deepened and created harmful consequences, in relation to landless peasants, indigenous peoples, afro-descendants (quilombolas), riverine people (ribeirinhos) and other social segments. And increasingly, this conflict has gained more violent traits as result of the intensifying class struggle. This is what we currently live in Brazil after the parliamentary coup d’etat of 2016.

After the coup, the Brazilian agrarian bourgeoisie and the agribusiness companies gained even more power in the current and illegitimate administration of Michael Temer, as well as in other government sectors. They are pushing for an even more conservative and violent agenda for the National Congress of Brazil, especially through the agribusiness caucus in Brazil’s National Congress, by removing rights, denying peasant families’ access to land and fueling violence that often results in deaths of landless peasants.

Recently, we have faced two brutal massacres against peasants in different regions of Brazil. One of them took place in Colniza, Mato Grosso, where 9 rural workers were killed just five days after the 20th anniversary of the infamous massacre of Eldorado dos Carajás, in the Amazonian state of Pará. This is the same state where, on May 24, 9 men and one woman—the president of the local union—occupied some land and then were brutally murdered by police in the distant locality of Pau D’Arco. This case shocked the society for its cruelty. Before being shot point-blank, all them where psychologically and physically tortured.

This wave of violence signals an advance of the capitalist model over workers’ rights and over the natural resources, land, minerals and water. This advance is accelerated by the coup we are living here in Brazil and its counter-reforms, including removing indigenous and black traditional populations’ land rights, changing all legislation about agrarian reform lands, and even opening the possibility of big land sells to foreign capital—thereby threatening our national sovereignty.

This political agenda is taking shape on different fronts. At the end of 2016, the government sent Executive Order 759 to the National Congress. This deals with rural and urban land use. It was sanctioned July 11, and now it is law. The main consequence of this law is the further concentration of land ownership and the privatization of public lands. With the titling process imposed by the government, farmland that was distributed through an agrarian reform process and is currently controlled by rural families can be easily put back in the market or sold. This makes it likely that it will be returned to the hands of wealthy families and agribusinesses.

In addition to favoring the concentration of land ownership in fewer hands, the new law exempts the State from its responsibilities to the landless families who benefited from the agrarian reform program. After issuing the land title to the small-scale farmers, the National Institute for Colonization and Agrarian Reform (INCRA), the government department that settles land transfer cases, is no longer responsible for implementing policies that will create better living conditions for the families benefited by the land re-distribution. In the same direction, the law favors the land grabbing of territories belonging to quilombolas and indigenous peoples—making it harder for local families to achieve the legal recognition of their ancestral areas.

Also, the government has stopped the settlement of new families by eliminating the Ministry of Agrarian Development and dismantling the INCRA, the main government department for the implementation of the agrarian reform.

Rafael: Was the big-agribusiness economic model strengthened by the coup d’etat?

Débora: The agribusinesses industry was very much empowered. At this moment, the “agribusiness caucus” in the National Congress has successfully pushed for the approval of laws that protect the interests of companies and large landowners, ranging from rolling back the rights of landless peasants, afro-descendant and indigenous peoples to allowing land ownership by foreigners and privatization of natural resources.

In sum, every law that still exists to limit the irresponsible and unrestricted action of the capital in agriculture is being relaxed. There is also a complete dismantling of remaining policies that benefit small-scale farmers.

Rafael: Violence in the countryside has increased. Is there a direct relationship with the political conjuncture?

Débora: The increase of violence in rural areas this year is alarming. Undoubtedly, it has a direct relationship with the current political context. The coup government—with the support of the agribusiness caucus—is rolling back economic, social and cultural rights, which prevents the strengthening of the peasant working class. It is also providing political cover for the growing violence, as the resolution of land conflicts are tacitly neglected by the local powers.

The current moment is a continuation of what has historically been done in Brazil: the use of truculence as the only strategy of conflict resolution. This is carried out by the state through its police apparatus going to the countryside to kill, fuel conflicts and generate deaths on the side of the workers. It is also carried out by armed militias, gunning and private security companies, which have impunity to do justice with their own hands: They evict, mutilate, torture and kill.

There is a sharp increase in the violence against the lives of those who fight and resist for land rights in the countryside. This year alone, dozens of people have been murdered in rural areas, including the massacres in Conilza, Mato Grosso state and Pau Darco, Pará state.

Rafael: How has the MST and the other social movements faced this setback in the rights of the working class, which violently hit the peasantry?

Débora: First, we need to be aware that we live a coup d’etat coordinated by conservative sectors of the Brazilian elite, the judiciary, the federal public prosecution, the national congress, the mass media outlets and imperialistic powers. To have this understanding is fundamental to facing this situation. This enables us to understand that our enemies are large and well-coordinated, and it is only possible to confront them with unity among the working class and progressive sectors of our society.

That is why we have dedicated our energy to the strengthening of spaces and struggles that point in this direction, like the Popular Brazil Front (Frente Brasil Popular), a broad front that has been built with hundreds of organizations—not only to have a shared analysis, but to carry out joint struggles.

But we still have great challenges to face as a result of the coup and its consequences. We need to better communicate and organize the masses. Political formation is also a need, so everyone can understand what is at stake and face this ruling class that plundered our country and massacred our people since colonization.

Rafael: What are the next steps for the movement in confronting the coup?

Débora: It does not matter who is in the driver’s seat of the government. Rather, we should be paying attention to what is happening when it comes to neoliberal labor and social security reforms, elimination of labor protections, land ownership by foreigners and setbacks in social, economic and political rights.

Rafael: What alliances have been built on a global level in the struggle against the capitalist system, and what are the next steps in this struggle? Can we see practical alternatives to the system?

Débora: Just as we have worked hard in Brazil to build alliances to face this difficult moment that we cross in the political conjuncture, through different fronts of struggle, we are in tune with other movements around the globe. We see La Via Campesina as a great intercontinental alliance of peasants against the encroachment of capitalism in agriculture and the privatization of water and forests. Another important initiative that deserves our attention is the coordination of social movements with Pope Francis II that organizes the International Encounter of Popular Movements.

It is an initiative from Vatican, under Pope Francis II, who is certainly a human concerned about the destiny of the poorest of the world and the Earth itself. In the first global meeting of popular movements in the Vatican—the World Meeting of Popular Movements in 2014—MST and other Brazilian movements joined with Pope Francis II. They released the statement: “No family without a home, no peasant without land, no worker without rights.”

After this first personal gathering of activists from all over the planet, a second edition of the event took place in 2015, in Santa Cruz de La Sierra, Bolívia. There was another gathering at the Vatican in 2016. Through this articulation, workers and peoples that who bear the brunt of capitalist failures across continents are sharing analyses and building a common agenda for their struggle.

A necessary step is the construction of massive unified struggles at a global level that can truly oppose and respond to the devastation wrought by the capitalist system throughout the world, not only in the appropriation of nature but also in the dismissal of rights and destruction of sovereignty. We can build movements that set the example, like the resistance of the people of Cuba and the struggle throughout Latin America and other parts of the world. Although these experiences are disjointed today, the challenge is precisely the need to articulate the various resistances in a single process, in a global articulation and action that can face capitalism.

For us in the MST, solidarity is key to our resistance. Along with peasants around the world, we are building this international alliance we call La Via Campesina. We study together, we face the same menaces in our territories, and we struggle together. 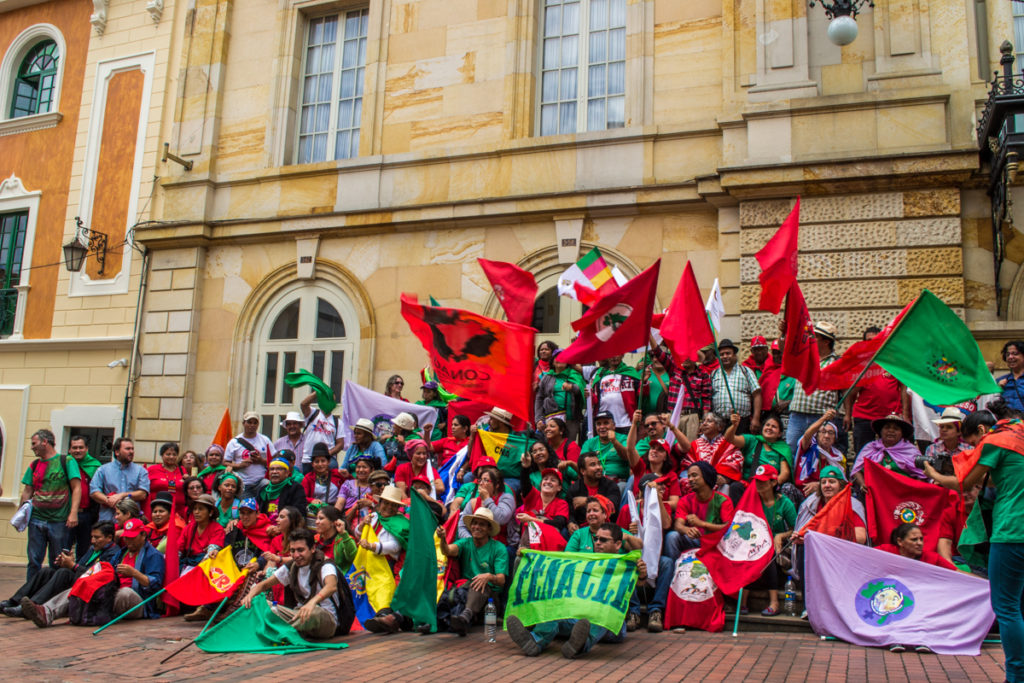