Home » Towards a popular vote on food sovereignty in Switzerland 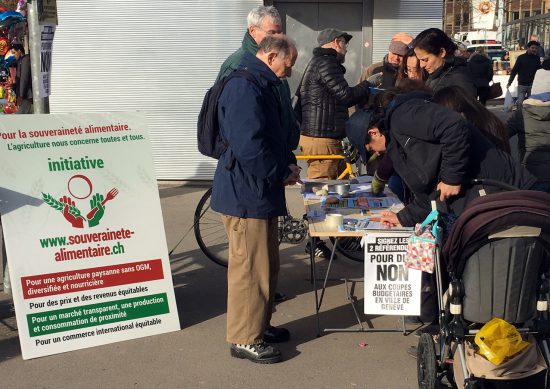 Uniterre’s quest to write food security into the Swiss constitution

On the back of La Via Campesina’s 4th international meeting in Maputo, the idea to incorporate food sovereignty into the Swiss Constitution took form under the Uniterre committee, a member of European Coordination Via Campesina. The Maputo gathering served as a call for actions towards food sovereignty and visions for reshaping domestic laws on agriculture and food policy. Allow us to recount our Helvetian process.

The Swiss system of direct democracy theoretically allows for changes to the constitution by popular initiative. In order for this to be done, first, proponents of change must produce a draft of the new constitutional article. Legal counsel can be useful in assuring the text’s force in the face of government scrutiny. After approval from the Federal Chancellery, the draft’s creators are given 18 months to collect 100,000 signatures from eligible Swiss voters. The text is then reviewed by the Swiss Federal Council (the executive branch) and Parliament (the legislative) and an assessment is given. These bodies, which have roughly three years to submit the text to popular vote, can issue a favourable or unfavourable review and even prepare a counter draft which will additionally be put to vote. There are rare cases in which the counter proposition, viewed satisfactorily by the authors of the original text, is withdrawn by the same. In such cases only the counter draft is submitted to popular vote.

The choice, for Uniterre, was between a “lite” form of food sovereignty, vague in its wording, and a methodologically detailed delineation of our vision for the constitution. The latter would narrow parliament’s margin for interpreting the text in such a way as to accommodate present legislation. To Uniterre, it was quickly patent the draft must remain faithful to the founding principles of La Via Campesina. In no case should the changes permit a weakened version of food sovereignty settling into the constitution, even if that meant the implicit lobbies (whether economic operatives, seed sellers or representatives of the food industry) and fierce resistance to the vote. That drove our preference for a text which addressed, in ten parts, the questions of production, access to land and seeds, income, wages, production management, international trade and free access to information. (Initiative text)

A popular push to collect signatures

On 30 September 2014, Uniterre and its partners received the green light to pursue signature collections, a far from simple task. Without any significant funding, the project moved ahead thanks to the efforts of countless volunteers, who braved rain and shine to assure a presence on the streets. Every opportunity to reach out to potential sympathisers was seized: parties, street protests, marches, outreach stands, national votes, conferences, mailings, inserts in ally publications. Once verified, signatures were forwarded to the local administration for official validation (to prevent duplicate signatures, verify right to vote, etc). Thousands of mailings were packed, shipped and tallied. It was a truly colossal undertaking.

It was still unclear a month from the deadline to hand over signatures whether we would meet our challenge. Finally, fuelled by one four-hour period during which 6,000 signatures were obtained, we were given cause for rest. Still ahead were the final administrative mailings and preparation of the official deposition of signatures in the capital 30 March 2016. The event’s culmination took the form of a festive street gathering of peasant farmers and consumers, marking the end of the initial stretch of a long struggle. The occasion served as grounds for orations and a shared meal of legume soup in the warm spring sun.

In June 2016, the Swiss Federal Council issued a communiqué in which it both declared the initiative unfavourable to the Swiss economy and announced it would not put forward its own counter draft. The council has until March 2017 to issue an explanation of its position.

It is worth noting in passing that there are currently other popular initiatives in agriculture and food being debated in Swiss parliament. Namely, an initiative was launched by Union Suisse des Paysans, the majority framework organisation of farming groups. The union acts to safeguard existing policies and steer the industry through through an era of decline. An additional initiative proposed by the Green party “for food equity” would hold food imported in Switzerland to the same social and environmental standards as those that govern Swiss farmers. Spurred by the welter of initiatives, the parliament has no choice but to take note of the unrest laid bare by the more than 400,000 signatures.

Returning to the “food security” initiative, as soon as the federal council’s announcement is made, the parliament must begin preparation of its own position. Today, there is every indication that it will oppose the text and urge the Swiss people to do the same in a popular vote it appears would be called between autumn 2018 and winter 2019.

Towards a popular vote

We have, since that time, undertaken a new phase aimed at broadening our support base. The task includes moving beyond the seventy organisations who supported us at the start and convincing a wider cross-section of the population of the issues of food sovereignty. The challenge is significant given the diverse activist and political agendas of each, all the more in an environment where many are hesitant to support ambitious and visionary initiatives.

So our work is one that must be done step by step, bringing awareness to the issues, engaging in debate and changing minds. Real mobilisation for the vote will begin the second half of 2018 with the scale increasing in the three months prior. Given scarce cash and manpower, our strength must come from the will and imagination of our activists if we are to be heard over Syngenta, Migros, Coop and Economie Suisse. Unfortunately, in direct democracies where there exist individuals ready to spend millions on ad campaigns. This is, of course, money that we haven’t got. One indisputable achievement is the clear distinction that now exists between food sovereignty and terms like food security, autarky and isolation. Peasant farmers must find their place in the debate and use this forum to both explain what’s at stake and demand their due.

Clearly, support from La Via Campesina’s international network is very important. It is the proof that such mobilisation in Switzerland reflects food sovereignty movements afoot around the world.