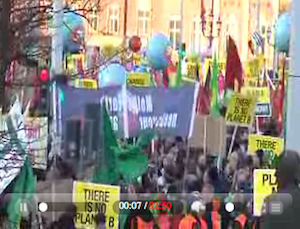 At the end of the first week of the climate talks at Copenhagen, thousands of activists from the Climate Justice Action and Climate Justice Now! networks are joining the climate march under the banner of System Change Not Climate Change to denounce the climate negotiations as a predictable failure. The protesters are demanding radical changes in economic and political systems in order to address the climate crisis.

The coming together of the Climate Justice Action and Climate Justice Now! is an unprecedented coalition of social movements, NGOs and grassroots climate activists from around the world to demand alternatives to the failed market solutions being pushed by governments and big business.

The System Change contingent has been tipped as the largest and loudest section in the march and includes people from 50 different countries. It will include a flat bed truck broadcasting music and speeches from prominent activists from the global south.

Josie Riffaud from La Via Campesina a global coalition of peasant movements, said
Weve seen this week in Copenhagen that governments are turning the climate chaos into comodities. Farmers  men and women – are taking to the streets today because we are so outraged by the ineffective targets and false solutions such as agrofuels being peddled by business lobbyists and governments that listen to them.

Lidy Nacpil from the Jubilee South Coalition said
All week we have heard a string of excuses from northern countries to make adequate reparations for the ecological crisis that they have caused. We are taking to the streets to demand that the ecological debt is repaid to the people of the South.

Lars Fredikssen, an activist from Climate Justice Action said
At the root of the climate crisis is an economic and political system that puts profit above people and the long term sustainability of this planet. Unless we address these root causes, climate change will devastate people around the world. These talks are a predictable failure and thats why we will be taking action next week to create a Peoples Assembly. We want the voices of ordinary people who are already being affected by climate change to be heard and listened to.

Both networks will continue to work together on 16 December, where they are planning to bring the energy from the streets into the Centre where the talks are being held. A massive Peoples Assembly will take place when thousands are expected to march to the Bella Centre to expose the false solutions and to propose positive alternatives and at the same time, hundreds of people inside the talks are expected to walk-out and join. (ENDS)