Home » 13 December : La Via Campesina against the Agro-Export Industry

INVITATION to an ACTION and a STREET PRESS CONFERENCE
At 12 pm, Axeltorv/Vesterbrogade, Copenhagen 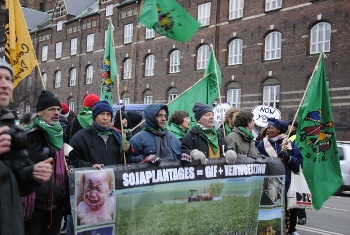 (Copenhagen, 12 December 2009) La Via Campesina will highlight the huge impact of industrial agriculture on the climate as well as on people’s lives and lands all over the world at the Axelborg building in Copenhagen on the 13th of December. The Axelborg building at the crossroads between Axeltorv/Vesterbrogade in Copenhagen represents much of what is wrong with the world’s food and agricultural system.

Axelborg is the headquarters of the Danish Agriculture and Food Council  which includes the Danish Meat Council who represent Danish Crown and Tican  the big players in industrialized meat production in Denmark.

Denmark exports over 85% of the pork it produces to markets all over the world. This excess is produced mainly by putting…soybeans through pigs, as the incumbent Danish Commissioner for agriculture Marian Fischer Boel has said.

This type of intensive production is based on imported soy which is transported thousands of miles, grown on lands in the south which have been cleared of forests and their inhabitants, which use huge amounts of fertilizers, pesticides and herbicides – cannot be green-washed. It is part of a transnational system of production and distribution which has used up the worlds resources at an unprecedented rate in order to create huge wealth for a tiny minority.

Agriculture in Denmark has been driven by this philosophy for many years  leading to an unprecedented concentration of land ownership, industrialization of production and a clear orientation towards production for export. This process has been disastrous for many Danish peasants. Danish rural communities have been destroyed and the environment degraded and polluted. Danish peasants in Frie Boender want to send a clear message  that the policies of the Danish agro-export industry are a concrete example for Europe and the rest of the world of how NOT to manage your agricultural systems.

The agribusinesses which profit from these processes are heating up the earth, destroying livelihoods and eradicating the very kind of peasant agriculture which offers real solutions. 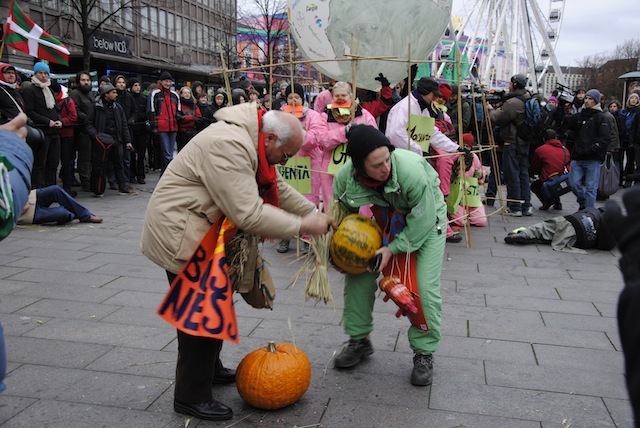 Sustainable peasant production and food sovereignty can cool the earth, protect biodiversity and relocalize production and consumption  reducing transport and energy use. The family farmers and peasants of La Via Campesina from all over the world are coming to Copenhagen to show that the time of the current model  endless growth, waste, profit and environmental and social destruction  is over: and that Food Sovereignty is the only just, sustainable and existing way to feed the world.

Join us at Axelborg on the 13th of December at 12PM  for the end of the industrial, agro-export world.