Home » The Role of Agroecology in the fight for Food Sovereignty 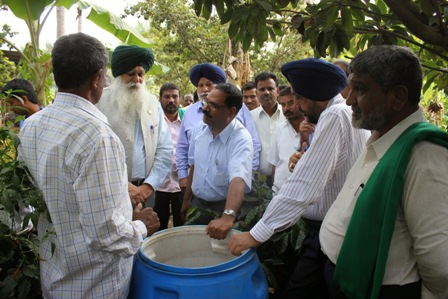 If the world’s 500 million small farmholding families adopt the agroecological (AE) system, it can transform the food system, bring profit to farmers and nutritious food to consumers, and mitigate climate change. In many developing countries agroecology is spreading, and at the same time in developed countries farmers are shifting to agroecology. In September 2014, I attended a two-day symposium at the Food and Agriculture Organization (FAO) as part of the International Year of Family Farming. This meeting focused on the role of agroecology in feeding the planet, and I went as a representative of La Via Campesina, the International Peasants’ Movement. I myself am a natural farmer based in Mandya, Karnataka, India. It is impressive to see an organization which has promoted industrial and conventional farming take a turn towards agroecology. Millions of small farmers support an agroecological food system, why can’t the FAO? And it is high time for the change.

In the past 20 years, life has become increasingly hard for peasants and the poor (as well as for members of other species.)

In the 1950s and 60s, the Green Revolution stepped into many countries with the mission of a zero-hunger world. Chemical fertilizers, pesticides, advanced technology, and hybrid seeds did bring a temporary increase in crop production. But what about long-term reduction in hunger? Even after fifty to sixty years, a huge proportion of the world’s population suffers from hunger, and this proportion is rising. It is currently estimated that 870 million people are suffering from severe hunger. Since the global population is estimated to reach 9.2 billion (from our current 7 billion people) by 2050, the demand for food will obviously increase. By 2050 we need to produce 70% more food for the world without collapsing the ecosystem.[1] The challenge is to increase food production for an increasing population along with conserving resources and reducing negative impacts on the environment. This has to happen along with social justice, and economically viable and culturally supportive methods of production.

Moreover, now food crops like maize, soya, and wheat are used not only for food but for agro fuels. The use of wheat to produce ethanol in the EU is said to increase 12 fold to reach some 18 million tons by 2016. Maize use in the US for the same purpose is expected to increase from 55 million tons in 2006 to 110 million tons in 2016. By 2020, industrialized countries may be consuming 150 kg of maize per head per year in the form of ethanol (a similar amount to cereals’ food consumption in developing countries). [3] Production of biofuels from food crops will definitely affect the access of have-nots to affordable, healthy food.  High crop prices will push more and more people to malnutrition and hunger, especially in developing countries. Along with this, cereals will also be used increasingly to feed livestock for meat production. A question arises: If crop prices are high, will farm income increase accordingly? Definitely not. Cost of production is becoming higher and higher after the Green Revolution.

Above all, the Green Revolution has contributed to climate change in all stages of production, processing, and distribution, which are now in the hands of a few MNCs who focus on profit rather than equality. In a country like India, where there is a huge population, it is a serious threat to food sovereignty if the food system goes into the hands of a few. A day may come where food becomes a weapon to control this democratic country!

At the FAO meeting, a lot was debated on agroecology as an alternative. The word “Agroecology” was defined, analyzed, and debated from many aspects. As a farmer, I felt that agroecology is the same system that traditional farmers adopted over centuries. Even today the majority of the smallholding farmers in developing countries where agriculture is providing the majority of the livelihoods are on the agroecological method of farming, which is under threat from the so-called advanced method of farming. Agroecology is a knowledge and skill set from experiences that are transferred from generations to generation. Now this knowledge is getting replaced by machines (for example climbing a coconut tree is getting replaced by machines, ploughing is replaced by tractors). Biodiversity played a fundamental role in ecosystem services, which is now threatened by mono cropping. The traditional agroecological system was the whole food basket for the family with very less dependency of purchasing food crops from the market. The diversity in crops gave food sufficiency.  Now the cash-oriented commercial crop is making farmers grow very few types of crops and purchase more from the market.

Soil management is one of the main concepts of agroecology. A review of development projects in 57 low-income countries found that more efficient use of water, reduced use of pesticides and improvement in soil health had led to average crop yield increase of 79%. In an agroforestry system with less capital, agroecology has kept farmers out of debt. Agroecology reduces the cost of production and negative impacts on environment. On the whole, with local market and self-sufficiency, agroecology was a model of agriculture that had not put the whole rural community to hunger and poverty. Farmers were and are leading a dignified life with all confidence and respect by this agroecological method of farming. Whatever the definition may be given to agroecology as it is a “science” “sustainable,” “model”, “need of the day ” (which was all discussed in FAO symposium) the ultimate truth is that only agroecology can keep the human being and all the other beings on earth healthy along with the health of the Mother Earth.

But in order to support this pro-farmer policies are key. Ecological farming must continue traditional knowledge with modern technology for which the policy makers must give balancing preferences to farmers adopting agroecology. Over the past century, up to 75% of the crop plant genetic diversity has been lost and a third of today’s diversity could disappear by 2050. Strengthening the use of diversity in plant breeding must be given importance and preference in policies, and polices must encourage the agroecological producer’s organization’s linkages to markets and value addition to products.

Government actions and measures are urgently needed to bring agroecology to the mainstream and to spread the knowledge of science of agroecology from farmers to farmers through organizations! One by one if we change our mindsets to agroecology we will change the world, and feed it too.