Home » The Maize Manifesto: No to GMO Maiz 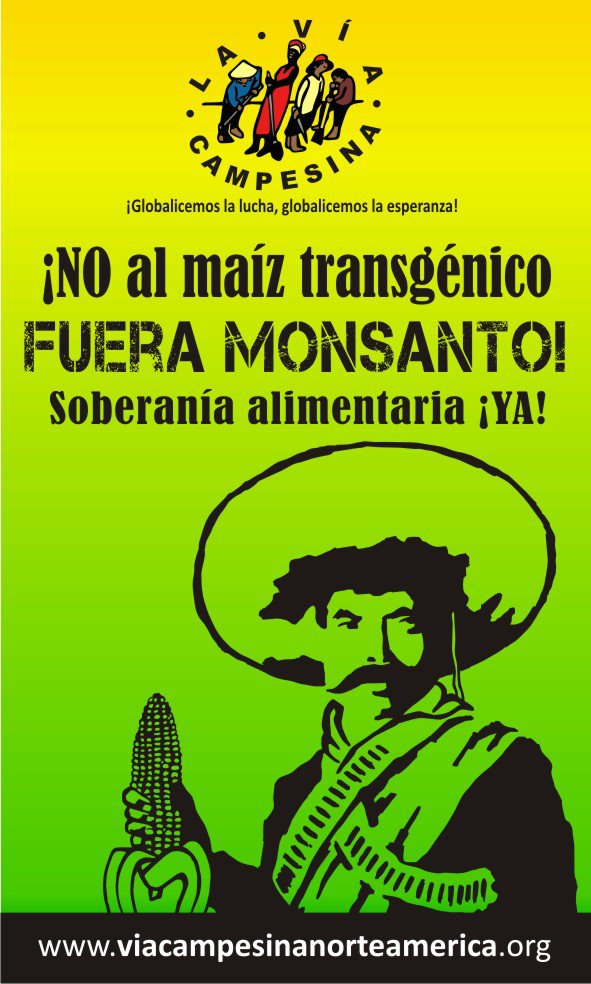 To the federal government of Mexico:
To the people of Mexico:

We have analyzed almost two decades of experience with GMO maize crops in other countries and there is not a single technological, economic or ethical reason in benefit of the Mexican population nor of the majority of rural producers, that justifies the imminent authorization of commercial planting of GMO maize in Mexico. Yet there are at least one million hectares being planned by Monsanto and Pioneer, in Sinaloa and Tamaulipas states in northern Mexico. Rather, the proposed coomercial liberation of GMO maize presents immense dangers to human health, biodiversity, culture and to our national sovereignty.

The transnational corporations are shamelessly looking to increase their profits through the pillage of our natural resources, even at the cost of peoples’ health, aided by official corruption and criminal acts, and this is particularly true for the companies dedicated to the production and industrialization of food.

The degree to which the federal government of Mexico, in the hands of expresident Felipe Calderon, working alongside the multinational companies that have been taking over the agro-food production in Mexico, trampled over the interests of consumers in the city and the countryside, and peasants and small producers in the countryisde, was unexpected, and put the agro-genetic heritage of our country at risk.

Despite popular demands to respect the precautionary principle and despite calls to protect biodiversity made by scientists, academics, and civil and social organizations,1 during the six-year term that just ended, the federal executive branch – by means of SEMARNAT (Ministry of the Environment) and SAGARPA (Ministry of Agriculture) – gave permits for the first open-field GMO maize plantings, without taking into account that Mexico is the key center of origin for this basic food crop necessary to feed our country and the world. Adding up both the licenses for experimental-scale GMO maize crops (162) and the licenses for pilot-scale plantings, there are now 177 open field permits in Mexico.

During last year the federal government gave 15 such authorizations to Monsanto and other foreign companies to do pilot plantings [the phase that comes after experimental and before commercial plantings] of GMO maize within our national territory, with the grave risk that transgenes could contaminate our criole and native varieties of this grain, especially because there are no barriers to the wind and the insects that are responsable for cross pollenization. What is more, maize gets mixed during transportation and storage and at the end the whole harvest will be contaminated.

On September 7th of last year, the seed and agrochemical company Monsanto presented applications to the National Health, Food Safety and Quality Service (Senasica) for the first ever commercial cultivation GMO maize, specifically the MON89034-3, MON88017-3 and MON-00603-6 varieties, on 700 thousand hectares in 10 municipalities of the mexican state of Sinaloa.

The new commercial applications are being analyzed right now by Senasica, while all the technical information that was required for the earlier phases of permits was and continues to beemanaged as industrial or corporate secrets, without independent review, while keeping the location of the experimental plots secret from the public. Monsanto pressured and lobbied to obtain the new commercial permits before the change of government (the new president was innaugurated in December), but public pressure managed to hold this up. If the new government approves these applications, which they may do very soon, the first massive contamination of a center of origin of an important pillar of the global food system will occur. In effect we will all be witnesses to a crime against humanity.
This comes at an ominous moment when Mexico is defined by its condition as a dependent country that imports 45 percent of its food, especially from the United States; with its agricultural infrastructure devastated and the countryside de-capitalized; with more than half of the total population livng in poverty, and with 28 million hungry people; all of this a result of free market agricultural policies that primarily benefit a tiny minority of large-scale producers and transnational companies to the detriment of everyone else.

Giving out permits for the commercial planting of GMO maize would be an attack on the constitutional right to food of the mexican people, making it ever more unlikely the majority of the mexican population could have access to healthy, high quality food, and it would essentially be the coup de grace to food sovereignty for the Mexican people.
The key to increasing food production in the countryside, reducing poverty and ending hunger does not lie with GMOs. This is an extremely costly technology, which does not increase yields,2 causes more dependence on imported seeds and farm chemicals, and provides no advantage to confronting the challenges of climate change and its effects, like frosts and droughts. This is in addition to the fact that Mexico’s agro-food crisis is not of technological origen but rather is a product of an economic model, where hunger is not a result of scarcity but rather of lack of adequate income to access food.

In our country there are more than 60 native races and thousands of local varieties of maize, which instead of representing some kind of risk, carry important virtues thanks to their selection and adaptation by indigenous peoples over more than seven thousand years. Some of these native varieties offer higher yields than the ones manipulated by Monsanto. The imposition of transnational frankenseeds would mean an end to this richness and the loss of the ancestral milpa tradition as a sustainable system of maize production and symbol of the Mesoamerican cultural inheritance.

Maize is the main food product for the people of Mexico, from it comes 39 percent of the proteins and 53 percent of the calories necessary for human life. Maize consumption per inhabitant is among the highest in the world. Mexicans directly consume between 115 and 150 kilograms of maize per person every year.

The maize that comes from Sinaloa and Tamaulipas states is distributed in all the main cities for the production of tortillas, either as maize dough or maize flour. The Commission for Environmental Cooperation of North America, in their study on the effects of GMO maize in Mexico,3 recommended to the Mexican government that it investigate specifically the effects that such high levels of maize consumption on a daily basis could have on health issues related to GMOs. The Mexican population has the right to not run that risk. We do not want transgenic tortillas!
We should not underestimate the risk for human health reflected in the recent study carried out at University of Caen, France, where researchers demonstrated that laboratory animals fed with Monsanto maize developed tumors several centimeters in size.4 This study represents the most overwhelming scientific proof of the dangers associated with genetically altered food. The GMO variety used in this experiment was precisely Monsanto’s MON 603, which they are now seeking to grow commercially in Mexico.

We reject that the State sacrifice our consumer population (turning them into lab rats) and we peasants and small producers, to support transnational companies who produce GMO seeds and agro-chemicals. We, the farmers, and not the transnationals, feed the population.

We also demand the cancellation of permits for the commercial planting of GMO soy crops which are a threat to peasant agriculture and to beekeepers.

Our struggle is also to repeal the neoliberal Seeds Law and the Law on Biosecurity and Genetically Modified Organisms, which have opened the door to the GMO invasion.

We call upon organizations, activists, and cultural and public figures, and all concerned people, to join us in these demands, because only with the full participation of an organized society can we stop this outrage.
NO TO GMO MAIZE IN MEXICO; MONSANTO OUT!