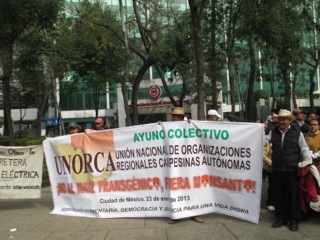 (Letter to the people and Government of Mexico: The Maize Manifesto: No to GMO Maiz)

This Wednesday, January 23rd, we will start a new phase in our struggle against the planting of GMO maize here in Mexico, consisting of a collective hunger strike held in front of the Angel of Independence monument in Mexico City. National peasant leaders from our organization from more than 20 states of our republic will begin a sit-in at this very symbolic location.

This act of voluntarily using our own bodies for civic protest will remind us of our almost 30 million fellow Mexicans who cannot find enough food to fill their stomachs on a daily basis. We want to reach the hearts and minds of the people of Mexico and the World to share our grave concern for the health, culture and economy of our nation, eroded by a development model that only benefits a tiny minority, a minority which includes the transnational corporations that today conspire to appropriate for themselves one of the greatest heritages of our peoples: MAIZE.

We want to express our indignation faced with the terrible blow that would come with the imminent approval of large-scale commercial planting of GMO maize in Mexico, and we demand that the Mexican government place the interests of peasants and the majority of Mexican farmers above the interests of a few transnational corporations. After his official visit to Mexico in 2011, the Special Rapporteur for the Right to Food of the United Nations, Olivier de Schutter, recommended that the government of then-president Calderón immediately suspend experimental planting of GMO maize, because of its impact on the rights of peasants, on biodiversity, and because of the importance of maize in the diet and culture of Mexicans. The government ignored that recommendation.

This is not just an issue for peasant farmers. The coming GMO maize invasion would impact all people as consumers, and would aggravate the terrible food dependency that our country suffers from. We respectfully ask you to join our struggle with a one day solidarity fast, and joining our sit-in if you can, or from the place where you live and work, by speaking out publically to express your support for our actions, sending a message to us and/or to the news media.

We are enormously grateful for your support.

Contacts to send letters of support :