Just after midnight on January 1st, was the 14th anniversary of the Zapatista uprising, and the caracol of La Garrucha was alive with celebration. >From the top of a refurbished school bus we watched a mass of bodies dance to norteÃ±os below a vast sky littered with stars, and the occasional covering of fog that characterizes the mountains of the Mexican southeast. 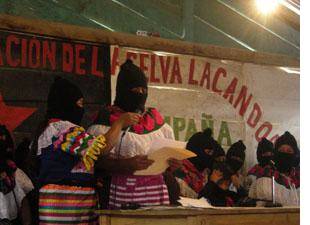 This night marked the end of the third Encuentro [Gathering] of the Zapatistas with the People of the World, and the first Encuentro of Zapatista Women and the Women of the world. Why a women’s encounter? “Because it was time,” repeated the voices of the masked women speaking before a seated audience of women from Zapatista support bases across Chiapas, as well as from social movements in Mexico and the world.

From December 28th 2007 to January 1st, women of the world were invited into the mountains and jungles of Chiapas which are home to the Zapatistas. This revolutionary indigenous movement erupted onto the international stage in an armed uprising on January 1st, 1994, with members calling out “!ya basta!” [enough already!] As the North American Free Trade Agreement (NAFTA), implemented on that same New Years Day, continued to decimate impoverished, indigenous campesino communities in Mexico, the Zapatistas began to build autonomous structures in resistance to over 500 years of exploitation, marginalization, and genocide.

However, as we heard emphasized throughout the recent encuentro, “the struggle began before and continued after” that much referenced New Years Day. And, it is important to remember that the previous year, in 1993, clandestine Zapatista communities and their army, the Zapatista Army of National Liberation (EZLN) experienced an internal uprising of Zapatista women who implemented the Women’s Revolutionary Law:

In La Garrucha, one of 5 autonomous political-cultural centers known as caracoles (snails) in Zapatista territory, we joined over 3,000 people to listen, observe, celebrate, and build stronger resistances with these rebellious Tzetzal, Tzotzil, Chol, and Tojolabal Zapatista women. Dressed in traditional colors, a line of some 200 Zapatista women filed in and out of the auditorium in a rainbow of resistance for each of the four daily plenary sessions.

Voices from different autonomous Zapatista regions offered a cascade of testimonies of their resistance. Representatives from the Juntas de Buen Gobierno [Good Government Councils], education and health promoters, comandantas [leaders] of the EZLN, and support bases young and old, told of how Zapatista communities, and women in particular, lived before the uprising, and how they live now, how they resist the violence of the mal gobierno [bad government], and what their rights and responsibilities are within their movement.

Women from throughout Mexico, the Americas, Europe and the world gathered inside the auditorium to bear witness to the testimonies of these women who are exploited three times over, “for being poor, for being indigenous, and for being women.” The surrounding fields were full of tents; families opened their homes, their yards, and their kitchens to foreigners and to compaÃ±eras and families from other autonomous communities. Many slept under make-shift shelters at food stands, on the ground in the auditorium, in trucks and cars, or beneath the stars.

We arrived to the Encuentro with a caravan of some 150 people from Mexico City organized by Mujeres y La Sexta. Most of us, like many of the non-Zapatistas who participated in the Encuentro, are adherents to La Otra CampaÃ±a [the Other Campaign], or its international component, the Sexta International. With the release of the Sixth Declaration of the Lancandon Jungle in June of 2005, the Zapatistas initiated a national plan of struggle, which seeks to unite struggles “from the left and from below.” A delegation of EZLN comandantes traveled across Mexico in 2006 in the first wave of this Other Campaign, with the intent to listen to the voices of those who struggle against capitalism and neoliberalism in all its forms, and to create new political spaces.

The days were filled with talk of the concrete measures Zapatista women and girls have taken to organize for self-determination, liberty, democracy and justice in their own communities. As the voices of the women rose up from behind their pasamontaÃ±as and paliacates (the ubiquitous ski masks and bandanas that have come to symbolize autonomous resistance in Chiapas), and began to echo each other, the significance of the testimonies became clearer to those of us from the outside. The voices being amplified were not individual voices, but reflections of a collective experience, a collective resistance. And while we national and international women listened, the lessons of the Other Campaign filtered through the plenaries like the fingers of sunlight sneaking through the wooden slats of the walls; in order to build a world in resistance, a world in which many worlds fit, we must listen and we must organize. As Comandanta Hortencia said, “To organize, we must identify why and for what.”

Humbly, the Zapatista women apologized for their Spanish, which is not their mother tongue, and for their lack of education. “Before, we did not know how to read and write, and now we have learned, and send our daughters to learn too.” The elder Zapatista women told of their experiences before the 1994 uprising. It was a dark time, when women were sexually exploited by land owners, frequently mistreated by their husbands and silenced by their communities. They told of how they organized clandestinely before the uprising, wearing certain colored shirts or bracelets to notify each other about meetings, which would be held quietly in the night far into the jungle. Since then, there have been many advances in Zapatista communities, where alcohol and drugs are outlawed as measures to curb domestic violence, a demand made by the Zapatista women. Women continue to take more positions of representation and responsibility, as education and health promoters, in the Good Government Councils, as comandantas of the EZLN, and in artisan cooperatives.

The voices of Zapatista youth punctuated the plenaries with hope and solemnity. “Without the organization, I would not be alive,” said Marina, a precocious and well spoken 8-year-old girl “I would’ve died of a curable disease.” Her empowered articulation exemplified the fortitude and success of the autonomous schools, as well as the sense of mutual respect between the youth and elders of the Zapatista communities.

Despite the advances made this far, the compaÃ±eras know that there is still a long and difficult road ahead. In the past 6 months Zapatista communities have faced heightened military and paramilitary aggression. While the Encuentro went on, an isolated Zapatista community named Bolom Ajaw (located in a strategic tourist zone) experienced violence from neighboring paramilitary troops and is currently being threatened with displacement. During the informal conversations held around tables at meal times, people spoke of the recent shift in tactics of governmental repression. Rumors and propaganda incited by paramilitary provocations between Zapatista and non-Zapatista indigenous communities is creating violence and conflict that allows the paramilitary groups to appear blameless. National and international civil society whispered of the strategic retreat and preparation of the Zapatistas.

“I’m calm in my struggle,” proclaims Elisa, echoing words heard again and again during the Encuentro; “There is no other path.” And with that, the loudspeakers boomed again with the rolling upbeat music that punctuated every session, and the Zapatista women lined up to walk ceremoniously out of the auditorium. For those three days, men were given a decidedly secondary role, and the comandantas ran a tight ship in enforcing the rules posted on multiple signs throughout the gathering space: Men were not allowed to represent or translate, nor sit inside the auditorium. Instead they were offered the tasks of cooking, childcare, cleaning the latrines and hauling firewood.

For centuries, indigenous and poor women have carried the responsibility of these tasks. Their backs have held the weight of the survival of their families, communities, and cultures. Their resistance is inseparable from that of their communities, serving as an integral source of strength. The Zapatista women emphasize a dynamic relationship between derechos y deberes [rights and responsibilities]. As young women born to white feminists in the US, we joined many 2nd and 3rd wave feminists in the crowd who’ve been taught that women’s liberation means equal rights, that it is a movement towards independence and self-determination. Our politics of feminism and solidarity are perhaps tested, seeing the women of this indigenous Zapatista movement declare their rights as integral to their collective responsibility, for the well-being of their community. Indigenous men, standing at the edges of the auditorium, shading their eyes from the sun nodded in agreement as the voices of the Zapatista women demanded the right to education, emphasizing the responsibility to become promoters of education. As their voices demanded the right to choose their own partners, they emphasized the responsibility of participating in family and community matters. By having a women’s encuentro, they sought to have their voices heard and not spoken over or marginalized. But when questioned about whether this was the beginning of their own women’s movement, and if they wanted to create more women-only spaces; they emphasized that the movement included their brothers, husbands, children, elders…everyone in the community. This appeared as something distinctly different from women’s liberation; more like collective liberation. Or better yet, described as Zapatismo.

When asked what non-Zapatista communities could do to support their work, the Zapatista women replied “Organize yourselves.” On the final day of the Encuentro, International women responded. Women from the La Otra CampaÃ±a, Via Campesina and student organicationss addressed the Zapatista women and the women of the world. Letters were read from political prisoners around the world. In the afternoon, Trinidad Ramirez took the stage holding her machete high, and spoke for the rebel farmworkers and political prisoners of Atenco. “We are not capable of abandoning our sisters,” she told the crowd, teary eyed with her testimony of trauma and unbreakable resistance. As she turned and climbed down the stage to a chorus of “Â¡VivaÂ¡” [Long Live!], rain suddenly began to pound on the tin roof. In sun and water, the struggling women of the world are suddenly reminded that we are all echoes of that which is alive and vibrant in the world. As the last plenary came to a close, a group of young Mexican students from the School of History and Anthropology offered to the seated Zapatistas a giant puppet called Emiliana Digna Ramona who had danced among the crowd the evenings before. “Though born in Mexico City, her heart is Zapatista, filled with the dreams of a better world.”

From the top of the bus on New Years Eve we watched this collective resistance, this collective survival, in all its celebration. When the New Year rolled in, it was met with silence, to honor the fallen martyrs of the Zapatista Army of National Liberation. The Comandancia climbed onto the stage, and the masses below took off their hats. Fog swept over the caracol as we sang the National Anthem and Zapatista Hymn, and embraced strangers and friends. The dancing picked up again and lasted all night. As the sun rose on another year of struggle, we carried with us the tiny piece of our responsibility to build a better world: to go home and organize.

Tessa Landreau-Grasmuck is a writer and activist from Philadelphia. She is currently working with a team to create a children’s book about Mayan spirituality and struggle.

Cory Fischer-Hoffman is an organizer with the Student Farmworker Alliance, she is currently working on her MA degree in Latin American Studies at the University of Kansas.

Kaya Weidman is a farmer and activist from Upstate New York. She is currently working to connect the practical work of sustenance with the broader work of building solidarity within the movement towards collective liberation.

Mandy Skinner’s main interests are in popular education, arts, and youth organizing. She has worked with the Beehive Collective and is on the board of ENGAGE, an organizing network linking students returning from grassroots/community-based study abroad programs.