Home » The Doha Round is dead! Time for food sovereignty 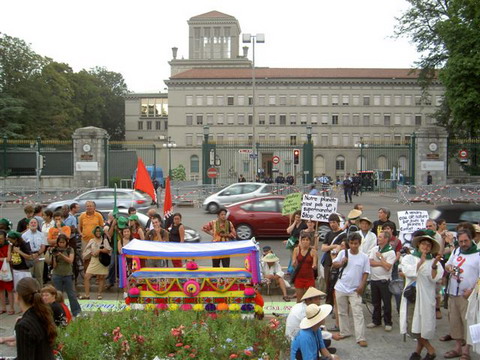 The failure of the WTO announced in Geneva by Pascal Lamy is a victory for La Via Campesina that has always opposed agriculture trade liberalisation. The Doha round is dead! Long life food sovereignty!

The 1994 Marrakech agreements have aggravated the economic crisis in rural areas throughout the world. The liberalisation of agricultural markets, the forced opening of borders and tariff cuts have put farmers in a global system of unlimited competition in which the only beneficiaries are transnational agribusiness companies and their shareholders.

The consequent collapse of the prices of most agricultural products has destroyed millions of small farmers’ livelihoods, leading to a rural exodus and an exponential increase of migrations. The development of an agricultural model aiming at short term profit has increased deforestation, land concentration, soil erosion, bio-diversity destruction and water contamination. In many countries it has been made possible by the repression of social movements.

Traditional fisherfolk have also faced an unprecedented destruction of marine resources. In many parts of the world, industrial fishing has ransacked the stocks, leaving fishing nets empty.

Contrary to its promises, liberalism has not been able to guarantee the right to food, even though this was enshrined in the Covenant on Economic, Social and Cultural Rights of the UN. However, the WTO has never considered the struggle against hunger as one of its goals. Today, over 850 million people suffer from chronic hunger, three quarters of them being farmers, landless farmers and agricultural workers. Even the FAO’s 1996 unambitious objective of halving this number by 2015 will not be met. We can not accept this situation because those who are suffering are not figures, they are children, women and men who are dying every day from hunger in a world that produces enough food to cover everyone’s needs.

The liberalisation of agricultural markets has permanently weakened the economy of many farmers and countries. Africa, presented as the area that should most benefit the from Marrakech agreement, has been totally defrauded. Sahel countries, forced by the World Bank to develop cotton in order to repay the external debt, have seen the collapse of their income due to the unfair competition with subsidised cotton imported from rich countries such as the US. Millions of hectares have been dedicated to intensive soya cultivation in South America to the detriment of local farmers and local food production. Argentine which had 17% of its population below poverty threshold in 1994 saw this figure explode. Today 40% of the population in this country suffers from hunger. Subsistence agriculture in West African countries has been swept aside by imports. Senegal now imports 500,000 tons of low quality rice. Countries such as The Philippines which were selfsufficient in 1994 must now import one million tons of cereals. In Indonesia, the value of grain imports has increased three-fold between 1994 and 2004 (from 60 to 180 million dollars). Hundreds of thousands of farmers in India and China are forced to leave their land in search of a hypothetical job. Meanwhile, amendments to their agricultural policies conceded by the European Union and the USA have neither limited subsidised exports, nor to created a fair distribution of agricultural returns.

Under the WTO, all human activities, such as water, health and education, have been treated as commodities and sold off to transnational companies. This privatization process has a terrible impact on the poorest people. Those cynical policies have triggered very strong conflicts, such as the struggle for water in Bolivia, that led to the emergence of governments proposing a real alternative.

It is indeed the arrogance and the contempt shown by the economic powers of the North, always prepared to co-opt a small elite among the leaders of emerging countries, that have been the real cause of the failure of the WTO.

Since 1995, La Via campesina struggles against free trade agreements. From Seattle to Doha, and from Cancun to Hong-Kong, La Via campesina marched in protest against the WTO. Pascal Lamy has admitted that the WTO was currently in a state of hibernation. We hope instead that it is in a deep coma leading to a rapid death. Economic liberalism is like an octopus: the WTO being the head, and regional and bilateral free trade agreements, the many tentacles which keep enslaving the people. La Via Campesina will continue and intensify the struggle against neoliberalism and will fight against all the free trade agreements that are currently being negotiated in the world. La Via Campesina will be active among other social movements around the world to carry on the fight against trade liberalisation.

In parallel to its strategy of struggle, La Via Campesina has developed with many partners an alternative proposal to overcome the crisis: food sovereignty. It proposes an international management of agricultural markets based on cooperation and responsibility in order to guarantee a just price both for producers and consumers. The right to food sovereignty is based on the strengthening of family farming and on a fair access to the means of production: land, water, seed, training and credit. This presupposes developing agriculture for local food sufficiency, as well as setting up short commercial circuits.

The collapse of the WTO opens new prospects for social movements. With its partners, La Via campesina will organize in Mali, in February 2007, the World Forum for Food Sovereignty. The objective of this ambitious meeting is on one hand to clarify some elements of the food sovereignty concept, and on the other hand to develop a global action to push forward this new people’s right at government level as well as in international institutions.