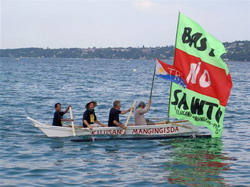 Several hundred demonstrators joined a flotilla of Filipino fisherfolk and peasant farmers from La Via Campesina in a march on July 27 in Geneva. At 5 p.m., the fisherfolk launched four boats that they had built themselves on the lakeside. The fragility of these traditional fishing vessels floating on Lake Léman presented an obvious contrast to the enormous trawlers of the European, Japanese, Korean and American transnational companies which furrow the seas and ransack marine resources. Some European and Asian peasants joined their fisherfolk colleagues in the boats. They did so to show their solidarity with families who live by fishing, and to emphasize that the food issue is not limited to agriculture. This alliance of fisherfolk and peasants around food sovereignty encourages a reflection on the management of natural resources.

A lakeside march started at the same moment as the action on the lake. The marchers from La Via Campesina included peasant women and men from Asia, Africa, Europe and America. Over twenty nationalities were represented. The Korean delegation carried a traditional coffin obviously representing the WTO. Many young activists from Friends of the Earth International denounced the overwhelming power of transnational corporations and overconsumption in the North. The World March of Women was also very present.

In front of the austere, grey WTO building, the demonstrators showed their satisfaction at seeing that the negotiations are in a state of hibernation. “I hope that it is a coma with death as the only end” declared one of Swiss participants. Henry Saragih, general coordinator of La Via Campesina, expressed his satisfaction that the social mobilizations over the past years had played an essential role in the current negotiations deadlock. He nevertheless urged the demonstrators to remain vigilant. “Free trade agreements and economic partnerships constitute a threat against which we must keep mobilizing. Together, we will make them collapse!”. Paul Nicholson, one of the European leaders of the movement, thanked the representatives of the Lémanique Social Forum, tireless fighters against the WTO, who played an essential role in the preparation and success of this unique lake and lakeside demonstration. He also invited all social forces to mobilize against the war waged by Israel against the civilian population of the Gaza Strip and South Lebanon.