Appeal to social movements in Thailand from La Via Campesina South East Asia and East Asia. 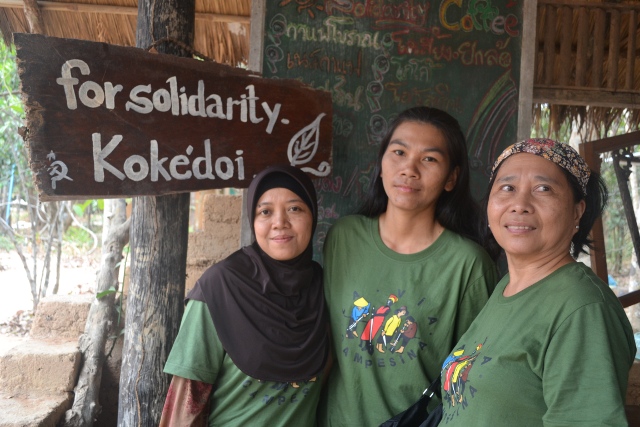 (Bangkok, March 6, 2014) La Via Campesina, the international peasant movement in south East Asia and East Asia, supports its member, Assembly of the Poor (AOP), concerning the political situation within the last five months in Thailand.

Social movements in Thailand are among the strongest of those that have been actively struggling for peace, justice, democracy and human rights in the Southeast Asia region. As social movement activists in other countries, we are concerned about the violent events taking place in Thailand. We all share the same feeling of outrage when injustice happens to our people. We share the same aspiration to establish a better society for our people.

The poor, who are the majority of most countries, Thailand included, typically confront two-pronged structural injustice. On the one hand, we are denied meaningful rights to participate in the state’s policy-making, especially the policies that involve control and accessibility of natural resources. On the other hand, we are victimized by aggressive attacks of transnational corporations and their allies in our governments and media, in the name of free trade and corporate freedoms that just intensify the causes of injustice.

Thailand, like many of our countries, finds itself amid prolonged political disputes between different ruling elites. These disputes can become overarching conflicts that obscure the real issues that we in social movements are trying to address. They can polarize and divide us. Our friends may share similar visions but take different sides in these disputes.

From our perspective, it is clear that in Thailand, as is the case in our own countries, none of the elites who dispute power genuinely care about the poor or the middle class. In Thailand, as in other countries, the major players in the dispute are the older oligarchic elites, based on domestic capital formation, and the new elites who are more linked to transnational capital. In Thailand, just like in other countries, both try to manipulate and confuse the poor majority and the middle class to serve their own ends.

It is sad for us to observe that the political dispute and manipulation of the poor and the middle class conceal the real causes of, and the roles of both kinds of elites in, poverty, inequality and oppression. Worse still, such manipulation demobilizes the social movements who might have been more insightful about the causes.

We are afraid to see that, in the end, social movements in Thailand might lose your social bases to one or the other or both of the elite groups in dispute. From afar, it seems that this dispute among the rich and the powerful is not a dispute that offers anything real for the poor or the middle class, beyond superficial and cosmetic reforms, or even reforms that are useful in the short term, yet do not challenge real structures of economics and power.

We are concerned that such destructive political disputes between ruling elites will invite more violence, and a possible coup d’état. The recent case of death and injuries occurring in the blocking of some polling stations in the early voting in Bangkok on 26 January 2014 intensifies our concern.

We urge the social movements and their grassroots membership in Thailand to refrain from feeding the violent confrontation on behalf of one or the other of the wealthy elites. While we do not feel that any political party offers hope of the real structural change that the poor majority needs, we feel that blocking elections in favor of appointed elite caretakers would only take things in an even more undemocratic direction.

Obviously, your decision during this destructive political dispute is critical. We feel that taking one side or the other does not serve the interests of the poor majority. But we do feel that blocking elections is not the correct solution either; that this would in no way facilitate a transition to a more democratic process; rather it would take things even further from the changes that are needed, and can be a tactic to bring a military intervention which would hurt everyone. Supporting elections seems to be the correct thing to do in this case, even if we have no illusions about any of the candidates or parties.