Home » Philippines : The government’s failure to redistribute land to the rural poor. 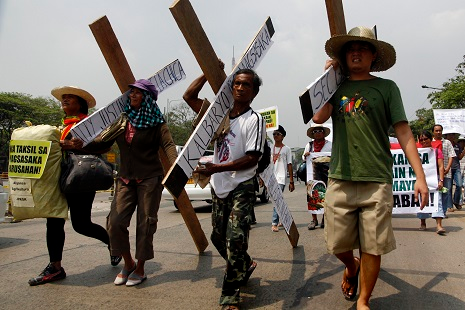 (Manila, March 12, 2014) Up to 300 farmers from five northern provinces descended on Manila on Wednesday to mark the start of Lent with a rally to protest against the government’s failure to redistribute hundreds of thousands of hectares of land to the rural poor.

Labeling themselves the “calvary of peasants,” the protesters symbolized their hardship by carrying crosses to the offices of the Department of Agrarian Reform in Quezon City.

The government has failed to curb rice smuggling into the Philippines that has undercut locally produced paddy farmers, nor has it dealt with companies who illegally seize land destined for poor farmers, he added.

The Philippines government has blamed “technical difficulties” for its failure to successfully complete an ambitious land redistribution program by this year which was first approved by the former dictator Ferdinand Marcos in 1972.

Although the government has reassigned more than 8.3 million hectares to over 5.4 million people so far, farmers and the Catholic Church have complained that the process has been too slow.

“We are suffering from worsening poverty and the denial of our most basic rights to land in the Philippines,” said Tadeo.

Last week, Father Edu Gariguez, executive secretary of the social action secretariat of the Catholic bishops’ conference, said the government should be sued for its inefficiency.

Nearly 800, 000 hectares are yet to be redistributed under the scheme. The government has asked for a two-year extension of the program until 2016 which must first be approved by Congress.

Farmers have complained that recent economic progress in the Philippines is passing them by, a point conceded this week by Socioeconomic Planning Secretary Arsenio Balisacan.

“We are aware that recent economic growth, at least in the Philippines, has yet to be felt by the poor, particularly small farmers,” he said.

The country’s GDP grew 6.8 percent in 2012 and 7.2 percent last year, placing it among the best economic performers in Asia.