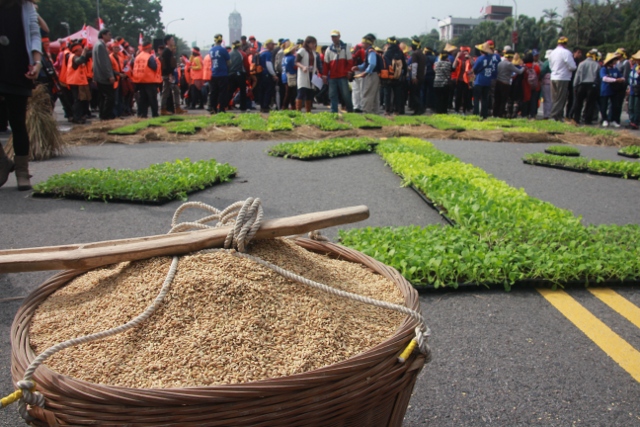 (Taipei, 31st of January 2013). Farming activists yesterday protested against the government’s plan to allow more imports of agricultural products from abroad — especially from China — and called on the public to join a rally in front of the Presidential Office on Sunday.

“The agricultural sector in Taiwan was seriously damaged when the nation joined the WTO [in 2002] and now it seems the government is trying to root out the agricultural sector with its plan to lift the ban on imports of agricultural products from China,” Liu Ching-chang (劉慶昌), a farmer from Jhudong Township (竹東), Hsinchu County, told a press conference at the legislature in Taipei. “I hereby urge all farmers, as well as everyone who is concerned about agriculture, to join us in our rally on Sunday.”

Liu and other activists are upset because Council of Agriculture Minister Chen Bao-ji (陳保基) said at a year-end press conference on Tuesday that some of the 830 types of farm products from China that are currently banned from being imported would inevitably be allowed to be imported, but the exact items were still to be decided.

The announcement triggered a furor, especially because President Ma Ying-jeou (馬英九) had repeatedly promised during his re-election campaign that he would not allow the import of the 830 types of products from China.

“As trade liberalization in the agricultural sector accelerated over the past two decades, prices of farm produce have gone down, while the cost of production has gone up by two or three times,” Chen said. “Meanwhile, the average annual income of a farmer has dropped from NT$270,000 to NT$220,000.”

As costs continue to increase and revenue decreases, many decide to give up on farming, he said.

“Despite the council’s claim that there are 810,000 hectares of arable land nationwide, only 540,000 hectares are still being used as farmland and, as a result, the nation’s agricultural self-sufficiency rate is only 33.49 percent,” Chen said.

Henry Saragih, general coordinator of the Indonesia office of international movement La Via Campesina, said that Taiwanese farmers could suffer the same fate as Indonesian farmers if the government does not do something to save the agricultural sector.

“Indonesia is an agricultural country, but ironically we import large amounts of products from abroad because we’ve become more dependent after we opened up the market in 1998,” Saragih said. “Farmers have no land to farm, because the land is now owned by big corporations, therefore a lot of young people from rural areas have to go abroad to work.”