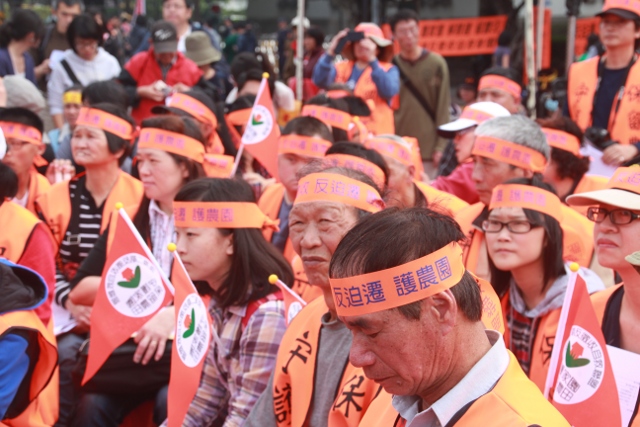 (Taipei Times, Feb 4, 2013). Hundreds of people, including farmers and farming activists from Taiwan, Thailand, Indonesia, South Korea, Japan and Malaysia, yesterday rallied against the globalization of agriculture on Ketagalan Boulevard in front of the Presidential Office, protesting against the government’s plans to lift more bans on agricultral imports.

“We gather here today to express our anger, we want to tell the government that we’re fed up with their compromises on our food sovereignty, it’s a serious problem that our food self-sufficiency has dropped to 33 percent now,” Taiwan Rural Front (TRF) spokeswoman Tsai Pei-hui (蔡培慧) told the crowd at the rally. “You’ve put our dining tables and refrigerators in other people’s homes, we want to keep them in our own places.”

In addition to a series of heated protests against land expropriations that have been going on for years, farmers and farming activists are worried that the government may soon lift the bans on imports of 830 categories of farm products from China, as well as pork products from the US, despite President Ma Ying-jeou’s (馬 英九) repeated promises that he would not do so.

“During the presidential campaign, Ma promised numerous times that he would not lift the bans on imports of 830 categories of farm products from China, but now, Council of Agriculture Minister Chen Bao-ji (陳保基) is saying that the bans ‘may’ be lifted,” said National Cheng Chi University land economics professor Hsu Shih-jung (徐世榮), a long-time advocate of farmers’ rights. “When the government decided to lift the ban on imports of certain US beef products amid strong opposition from the public, Ma also firmly promised that the imports of US pork products would remain banned ― yet the US government is now pressuring the Ma administration to lift the ban.”

Hsu said farmers across the country now “have little confidence in this incapable government” and therefore gathered to voice their opposition to free trade in the agricultural sector and to call on the government to insist on agricultural sovereignty.

Henry Saragih, the general coordinator of the Jakarta, Indonesia, office of international small farmers’ organization La Via Campesina, said that the problems that Taiwanese farmers encounter are the same for farmers across the world.

La Via Campesina is an international coalition of peasants’ movements with 148 member groups in 69 countries around the world.

“Land grabbing, loss of food sovereignty and an increasing number of people threatened by famine ― now reaching more than 1 billion ― are problems created by the WTO, globalization and neo-liberalism,” Saragih said.

He said that Thailand, for instance, which originally had a diverse agricultural sector, now specializes in producing rice for export, and has to import other produce.

South Korea has become an exporter of electronic products, “and since most of its farmland has been taken by the industrial sector, some South Korean agricultural companies now grab land in Africa ― especially Madagascar ― to grow produce to be imported back to South Korea, leaving Madagascan farmers landless,” Saragih said.

Wirat Phromson, a member of the Northern Peasants’ Federation Thailand, urged farmers in Taiwan to continue their struggle.

Citing the farming rights movement in Thailand, Phromson said that despite the seeming flexibility of the Thai government and its promise to revise laws, “the [Thai] government eventually amended laws concerning the agricultural sector, but not for the interests of the peasants. Rather, it was for the interests of big corporations.”