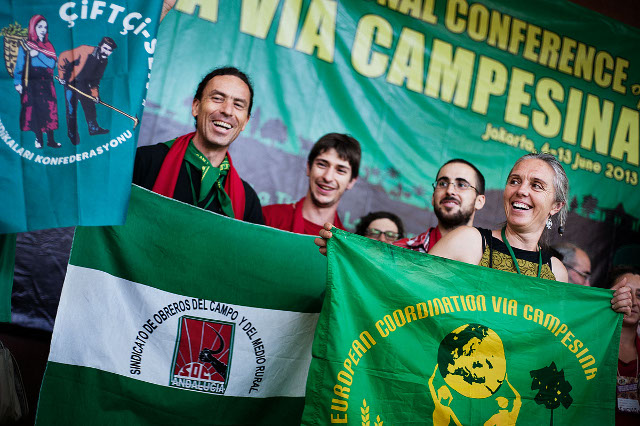 The profound economic and social crisis that is affecting the continent of Europe is causing suffering to its peoples, with unemployment rates reaching 35% in some countries, the dismantling of public social programmes, the worsening of labour exploitation and insecurity, and an unaccustomed increase in poverty. All of this is compounded by a high level of police and legal repression directed against the innumerable struggles that are breaking out in opposition to neo-liberal adjustment measures. In the countryside, while the number of small-scale farmers, women and men, is decreasing every day, the multinational companies are taking over more and more farmland, and European farm policy continues to favour the maintenance of large unproductive rural estates as well as agribusiness and the industrial agricultural model.

In Andalucía, in south-western Europe, agricultural day-labourers, both native and immigrant, are rising up in a struggle for land and dignity. Since March 2012, the Sindicato de Obreros de Campo (the Union of Farm-workers) has carried out many land occupations, which have succeeded in bringing back the question of land reform as a subject of public discussion, both in relation to the corporate take-over of land and natural resources and to worker self-management, agro-ecology and food sovereignty. Among the most important land occupations is the one that took place in Somontes in Córdoba. For more than a year, farm labourers have been carrying out an ecological project of social farming on 400 hectares of public land that were on the point of being privatized; they are engaged in planting fruit trees, ecological livestock raising, and selling their produce directly through alternative social networks. The rural military estate of Las Turquillas, in Sevilla, which on more than 1,200 hectares only managed to raising a few dozen horses, has been occupied twice; the evictions were carried out just as the first planting was being started. In Jódar, in the province of Jaén, more than 60 landless farm-workers, women and men, are carrying out a daily occupation of the La Rueda estate; at the present time, this estate, with its 600 acres of abandoned olive trees, is in the hands of the BBVA Bank, which is only seeking to speculate with the benefits of the European subsidies and to attain greater financial profitability.

On the other side of Andalucía, in Almería, where more than 30 hectares of greenhouses have been abandoned, 130 Moroccan agricultural labourers, women and men, who are owed more than a million euros in unpaid salaries and indemnities, have decided to remain at their place of work. It is the first time that farm-workers have occupied a worksite and have decided to continue production, under worker management, until the money that is owed to them is paid and they are given assurances that their jobs will be maintained. In addition to increasing the number of struggles and occupations, the Sindicato de Obreros de Campo has presented a parliamentary bill on the Andalucían Agrarian Heritage (Patrimonio Agrario Andaluz). This bill calls for land to be publicly owned and to be assigned to workers’ cooperatives whose agricultural practices are to respect the principles of agro-ecology, biodiversity, and food sovereignty.

The Sixth International Conference of the Via Campesina salutes and supports the struggles for land and for natural resources that are taking place in Andalucía and throughout Europe. The Via Campesina is placing its stake on the unity between small-scale farmers and peasants, agricultural workers, and rural migrants in the struggle for another agrarian model, based on food sovereignty and non-capitalist small-scale agriculture, as an essential contribution to the process of social and political transformation that our planet is in need of and that cannot be postponed.