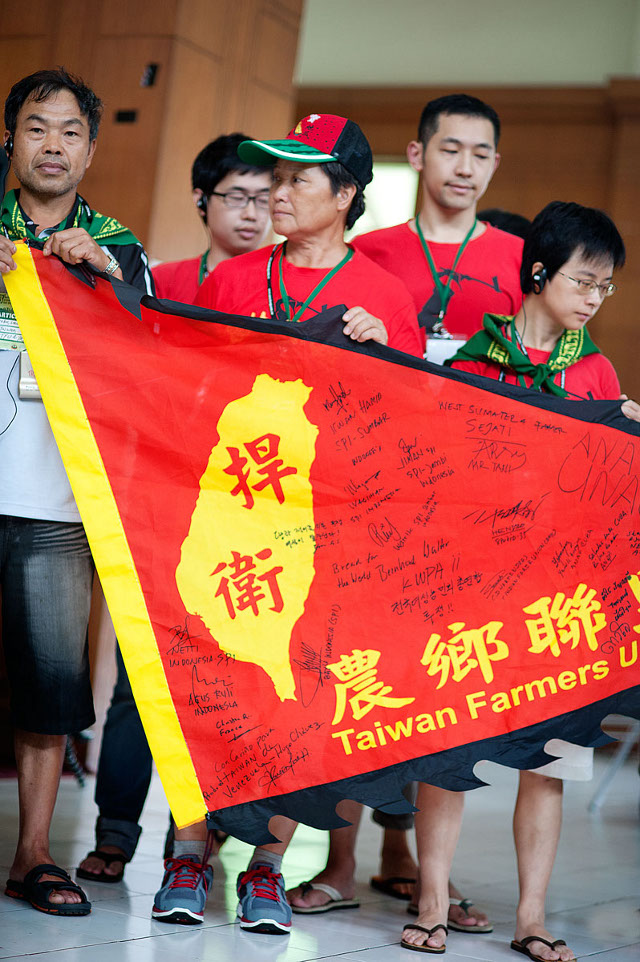 The Southeast Asia and East Asia of La Via Campesina send solidarity and full support to the small-scale and family farmers who have struggled against land grabbing for last a few decades and the liberalization of agricultural market and for the right to farm and right to live in the rural area.

Once branded as one of the Four Little Dragons, Taiwan now suffers from the bitter fruit of its development under neoliberal capitalism. In the name of science and industrial complex projects, the power of eminent domain has been routinely exercised and abused in Taiwan. As of now, 6378.15 ha. of land is under threat of forced expropriation, which triggered farmers’ large and strong resistance in the form of anti-land-grabbing and anti-water-grabbing movement across Taiwan.

The land expropriation is a very serious state measure because of the grave moral, political, and material consequences involved. It should not and cannot be abused. Land grabbing happening in Taiwan now goes against the basic rights of people’s livelihood. We think that the mode of development, which strips people from their rights to property, subsistence and a healthy environment, is a regressive one. Land, water, and other natural resources are not just production resources but also essential to common people. The just survival of people on their own land should be protected against any developmental means.

The cases in Asia and other continents including America, Europe and Africa, all show that the farmers who haven’t had and taken their own land are forced to migrate to the urban areas or even abroad to desperately look for jobs but come into suffer from the hunger, poverty, even jobless.

Besides depriving peasants from their means of production, the administration in Taiwan has agreed to the import of U.S. beef and pork product since 2011 in order to move the stalled Taiwan-U.S. Trade and Investment Framework Agreement (TIFA) agenda forward. Furthermore, the state is now pushing for the import of 830 agricultural products from China under the bi-lateral preferential trade agreement, Economic Cooperation Framework Agreement (ECFA). Such false measures have put the livelihood of Taiwanese farmers and the health of general public to inscrutable risks.

The free trade agreement is not fair or just. Trade liberalization in past decades has resulted in the widening gap between the rich and the poor in Taiwan. The Korea-U.S. FTA (KORUS FTA) further exemplified that an FTA does not simply lower or eliminate tariffs; it is also an unfair trade pact with toxic provisions which undermine the food sovereignty and even the national sovereignty.

Therefore we demand the government to

The Southeast Asia – East Asia Region of LVC believes that Taiwan farmers struggle for the land justice are not only for themselves but also the small-scale and family farmers in the world. We will continue to work together with Taiwan Farmers Union and Taiwan Rural Front to achieve and implement food sovereignty and peasants’ right in the region as well as in the world.