Home » Solidarity with people in urban and rural Turkey 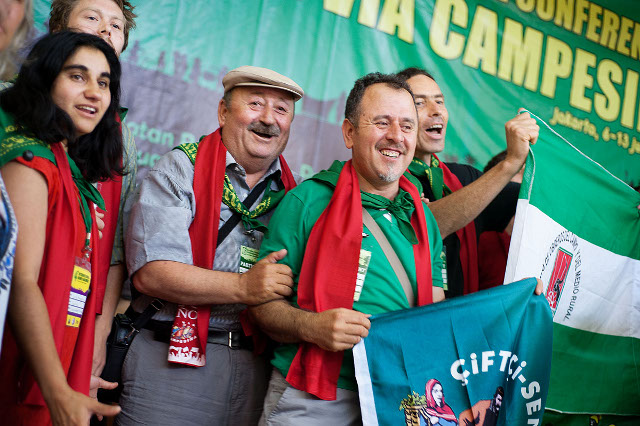 We the peasants from all over the world came together in Jakarta, Indonesia to celebrate the 20th anniversary of the global peasant movement La Via Campesina between 6th and 13th of June 2013. As we are celebrating the anniversary of our peasant struggle,  we are aware that on these same days, people in Turkey have been struggling for their rights to manifest their opposition to the demolishment of one of the central parks- Gezi Park- in the city of Istanbul. In parallel with the voices of the protesters, we recognize that this resistence is to defend the democratic rights to oppose the neoliberal policies which destroy the ecosystem, privatize the commons and living spaces, and ignore the rights of the people to participate in decision-making processes.

As members of La Via Campesina, we know that the protests in Turkey which emerged in Gezi Park have spread all over the country as people of Turkey have been seeking their democratic rights to express their discontent about the oppressive policies of the government. Hereby we declare that peasants of La Via Campesina are in solidarity with people in urban and rural Turkey, opposing the neoliberal transformation resulting in urban gentrification projects, privatization of the commons, landgrabbing and  commodification of water, etc.

We join the public’s demand for the protection of Gezi Park and cancellation of the neoliberal restructuring of urban and rural spaces. We condemn the excessive police violence exerted on the protestors. We join the demands of our comrades in Turkey that everybody who are responsible for the deaths and thousands of injured people, who gave the orders and who implemented the violent repression of the basic democratic rights should be dismissed from their posts and judged. We, the peasants from all over the world, are in solidarity with people in Turkey and ask for the abolishment of all the bans and defacto blockings hindering the rights to demonstrate in squares and public spaces. We also demand the removal of all the barriers to freedom of expression.