Gerak Lawan and the Social Movements on Alternatives for Asia 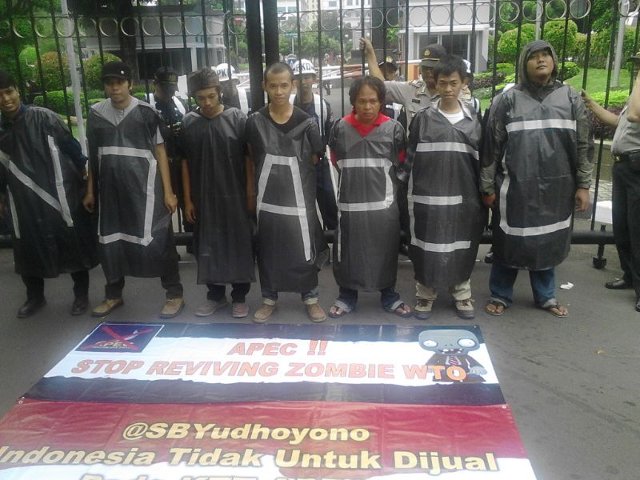 The 2013 Asia-Pacific Economic Cooperation (APEC) hosted and chaired by Indonesia this year, met in Bali from 5-7 October 2013. The APEC has no enforceable agreements like ASEAN’s, but it continues to serve as a platform for economic and political leaders to come together and mainly push the agenda of investments liberalization and free trade, and address security issues in the region.

Nothing, of course, is said about the tremendous social, environmental and economic damage inflicted on Southeast Asian and other South countries by the trade and investments liberalization regime. A pillar of neoliberal economic globalization, together with deregulation and privatization, trade liberalization has and continues to be one of the major causes of the progressive erosion of domestic economies and local production. It is a key strategy in the drive for unhampered economic growth that privileges markets and profits over everything else, and values human beings and the environment primarily for their investment and profit return potential.

APEC does not negotiate trade agreements, but it stated goals, known as the “Bogor Goals,” include freer trade and investment throughout the region. APEC views itself as an “incubator” of an eventual Free Trade Area of the Asia-Pacific (FTAAP), a major instrument to further APEC’s regional economic integration agenda. And it identifies the Trans Pacific Partnership (TPP) agreement as a “stepping stone” to contribute towards the deepening of free trade liberalization in the region.

The TPP, is a mega free trade agreement being pushed by the US and its partners with a larger goal of gaining access to the markets and vast resources of the Asia-Pacific region. Under the TPP, pacific nations will be pressured to eliminate all entry import restrictions, trade quotas, tariffs, hiring requirements, labor and environmental laws, bank regulations on banking services and retailing, indigenous rights, mandatory labeling of genetically modified food and other measures, allowing transnational corporations to freely enter with fewer controls and a stronger intellectual property protection including a longer patent period that prevents access to medicines for millions of people. It will ensure “national treatment” for transnational corporations, guarantees a liberalized government procurement regime, and, a WTO-plus agenda pursued by the TPP. Its ISDS (Investor State Dispute Settlement) clause undermines a range of public health and environmental policies by providing corporations with the right of suing the state on the grounds that their promised profits are not earned in the country.

Aware of APEC’s free trade mission, we thus view with grave concern the role that it is playing vis-à-vis the World Trade Organization (WTO), which meets for its 9th Ministerial Conference only two months after the APEC meeting, also in Bali, Indonesia. The WTO is today ridiculed as the “walking dead”, having been discredited among its own members after numerous breakdowns in talks and failing to deliver on promises to end agricultural subsidies and level the playing field of market access especially for developing and least developed countries. It has been discredited as well among the large impoverished populations of the South who, in all of WTO’s 18 years, have borne the harshest impacts of the free trade and investments regime that it is promoting.

The WTO though is now presenting itself as an additional lifeline for developed countries still gripped in crisis, as a way to shield emerging economies from the contagion, and as a means through which transnational companies can further expand.  And not surprisingly, we find the 2013 APEC agenda dovetailing with WTO’s attempts to gain a new lease on life, aiming to strengthen in Bali commitments for the strengthening of the multilateral trading system; and facilitating trade and investment liberalization.

We, the members of Gerak Lawan and the Social Movements on Alternatives for Asia and oppose all attempts whether of the APEC or the WTO to deepen free trade liberalization in the region and strengthening the global trading system for the interests of transnational corporations and the developed industrialized countries.