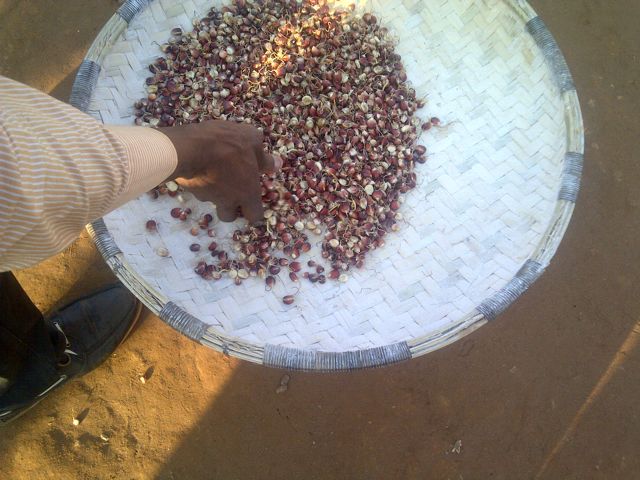 Over 100 small-scale farmers and rural woman came together in Lilongwe during the August SADC Heads of States Summit as a regional collective of the People’s Dialogue, the Rural Woman’s Assembly and Via Campesina Africa to come up with alternatives and  practical solutions to end rural poverty and promote people-driven development in the Southern Africa Development Community region (SADC).  One of the key demands was the adoption of Food Sovereignty by our governments as a policy in all SADC countries, which means the right of countries to control what, how and where they produce, and to control the policies and programmes under which they produce.

Our governments have given up much of our food sovereignty when they signed free trade agreements with the European Union (EU) and the WorldTrade Organisation (WTO), thereby opening up our counties markets and export for the benefit of corporations and exporting countries both in the North and South.

These policies have resulted in southern Africa becoming a nett importer of food.

Another key demand is for seed sovereignty, protection of our biodiversity and GMO (genetically modified organism) free SADC.  Maintaining seed sovereignty and seed banks have become a majoir challenge for small scale farmers when they have to compete  corporations. Six largest agrochemical and seed corporations (DuPont, BASF, Monsanto, Syngenta, Bayer and Dow)  are in pursuit of exclusive monopoly over plant gene sequences.  In addition the Green Revolution, the Alliance for Green Revolution in Africa (AGRA), the Comprehensive Africa Agriculture Development Programme (CAADP) and the G8-New Alliance for Food Security & Nutrition poses a major threat to seed sovereignty and will continue to destroy peasant farming. This means our governments will be signing agreements that will give greater control over most of the worlds plant biomass whether it is used for food, feed, fiber or fuel to  trans national corporations.  Therefore the participants demanded that companies such as Monsanto and megaindustrial agriculture projects like ProSavana in Mozambique must get out of Africa!

Seed saving is a core component of food sovereighty and ecological agriculture. The protection and conservation of genetic resources requires conservation of locally adapted varieties and genetic resources at the farm and local community level, as well as in national and regional gene banks. A sustainable seed supply system is rooted in the on-farm selection of locally adapted varieties. The direct and active involvement of local farmers is a critical contribution to this resource. 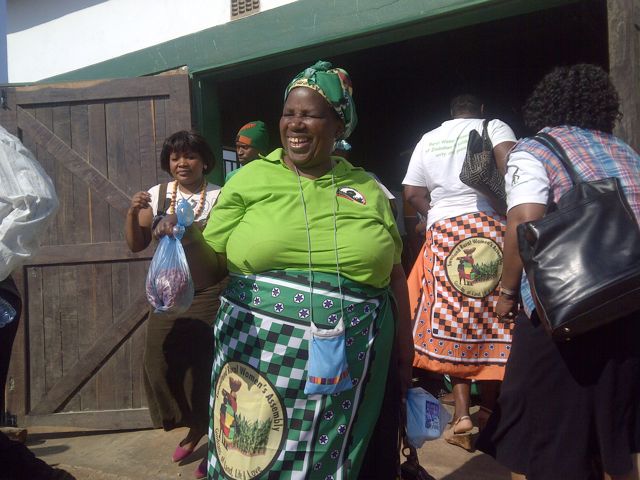 Seed saving and the involvement of local small-scale farmers was practically demonstrated at an farmers exchange field visit in Lilongwe South, organised by the National SmallholderFarmers’ Association of Malawi (NASFAM)for the rural women and peasants that attended the SADC People´s Summit in Malawi.

The small-scale farmers and rural women from the region had an opportunity to meaningful engage, share information and farming materials, with their Malawian counterparts in Lilongwe.  They witnessed how the local small farmers organized the production and market systems of rice and groundnuts and seed storage.  Elijah Lomwe manager of NASFAM Lilongwe South IPC Office gave a background of the cooperative and explained how the warehouse received crop from farmers.

Regarding seed saving, Elijah Lomwe explained that community leaders are responsible to recover seeds from where they live and have set up Group Action Committees (GACS) to collect seeds, which are then transported to the warehouse, a field officer is fully involved in the transportation. During the visit the whole storage system was described to the participants, which entails moisture testing, sampling, weighing, bagging the consignment and stacking.

All the commodities are received and recorded in Good Receipt Note (GRN) at the warehouse. A moisture test is used to determine the level of moisture, if it is less the 13% then it good for storage. More than that then the bag is re-dried further. When the season starts some of the seeds are returned to the farmer’s. The recycled seeds are used for 3 consecutive years, after which a new seeds are procured to replace the recycled seeds. 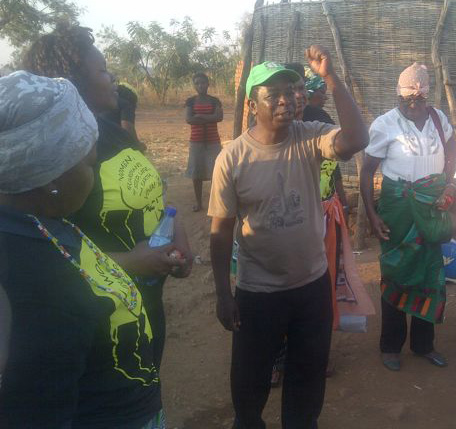 (Renaldo Chingore from Via Campesina, expressing solidarity with small-scale farmers from Lilongwe)

He also spoke about the value of the Warehouse Receipt System, which is aimed at creating market access and more transparency in the market place. By the farmer obtaining a warehouse receipt, provides proof that the commodity meets the required quality and has been deposited by the owner in the warehouse.  Once the farmer sells to NASFAM they are paid 70% and after the seeds are sold they get the rest of the 30% The Warehouse receipt also helps farmers to fight poor prices and post harvest losses in a number of ways:

1.     If the farmer brings the commodity to the warehouse, he/she is assured of scrutiny, safety and professional storage.

2.     The warehouse receipt makes the farmer eligible for bank loan of up to 70%.

3.     The farmer can access better markets as well as good prices.

4.     The farmer can also access export markets and can have quality inputs.

The NASFAM Lilongwe South IPC Office also provides marketing advice.  When the farmer is ready to sell, it is done through the ACE platform or any other buyers by observing the market prices.  NASFAM aids the farmers by providing sms alerts on the price to help them make a decision on when to sell.  One of the participants raised a question on whether NASFAM buy’s seeds from any farmers or only from the association?  The response was that it is open to everyone but priotrity goes to members.

Following the visit to the NASFAM Lilongwe South Office was a memorable visit to one of the woman farmers´ farm in her village in Kalunga. Alice is active member of NASFAM and the Rural women’s Assembly.  The visit to Alice’s farm illustrated practical ways of open seed saving and on-farm storage.On Alice’s farm they grow maize, produced a local drink and farmed livestock and chickens.

Small scale farmers in Southern Africa face a number of challenges. Besides access to productive resources such as land, seed and water, once they manage to produce they often have to contend with infrastructure challenges  such as transport, storage and access to market.  This farmer’s exchange demonstrated how the small-scale farmers can produce food and contribute to wider development nationally if their local social and economic endeavors are supported. Rural woman and small-scale farmers witnessed how the local small farmers organized the production and market systems of rice and groundnuts, which have evolved and became integral to their community livelihoods, including employment creation through value-addition processes.

In conclusion, it therefore imperative that the SADC governments should support sustainable peasant agriculture production systems and develop local markets for their produce and be linked to home industries, thus creating employment for both rural and urban populations, if inclusive equitable development is to be achieved.