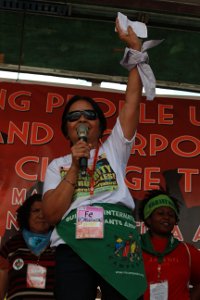 We have seen climate change related phenomena with intensity never seen before, like Hurricane Sandy, in many parts of the world in the past year.We no longer have the luxury of time as incidents of increasingly severe storms, floods, droughts, disruption of water cycles and other similar eventsare becoming the “new normal” for many countries. It is also becoming apparent that climate change is instigating more forced migration, and will createmore climate refugees. An estimated 200 million people could be displaced by climate change by 2050. In 2010 alone, it was estimated that more than30 million people were forcibly displaced by environmental and weather-related disasters across Asia and this number will continue to rise. Climatechange has also been wreaking havoc on crops and farmlands, worsening the already growing food crisis and pushing even more people into hunger.

And yet, despite the increasing devastation wreaked by climate change on farmlands, livelihoods, and homes, the UN Framework Convention onClimate Change (UNFCCC) negotiations are moving backwards instead of moving closer to a global agreement that will stabilize and cut greenhousegas emissions. The premise of the climate negotiations has always been based on the principle that developed countries need to live up to theirhistorical responsibility and yet from Cancun to Durban to Qatar, negotiations have instead focused on how developed countries can escape theirprevious commitments. Now, with the current proposals on the table, not only are developed countries going to be able escape commitments bywatering obligations down to voluntary pledges but they will also be able to create more carbon markets and loopholes in order to not take any action atall. Estimates from a study by the United Nations Environment Programme (UNEP) have calculated that even without all the loopholes, these currentpledges will lead to an increase in the temperature of up to 5 degrees centigrade.

It is not too late nor is it impossible to arrest this march towards climate chaos. We know what needs to be done:

First, science has been clear that a huge source of greenhouse gas emissions is the carbon dioxide (CO2) produced from oil, gas and coal use. According to the International EnergyAgency, two-thirds of the known reserves of the world’s coal, oil and gas should remain underground to have a 50% chance of staying below the 2 degrees centigrade limit. Therefore, if we want a 75% chance, we have to leave 80% of these oil, gas and coal reserves under the soil.

Second, the United States, as the main historical emitter, has to urgently drastically reduce its emissions more than everyone else. All developed countries called Annex 1 parties in the UN climate negotiations should urgently make drastically deep cuts, until 2020, at least 40 to 50% of their emissions based on 1990 levels. These commitments should be translated into concrete targets in coal, oil and gas usage per year, without using loopholes, offsets or carbon markets.

In this light, China, Brazil, South Africa, India and other emerging economies should also have targets for emission reductions as they are fast becoming the big emitters ofgreenhouse gases. These binding targets should be lower than the targets of Annex 1 countries, following the principles of historical and common but differentiated responsibility.

If we want to have a future on this planet, we need real solutions. We need to move beyond the all-dominating, profit-driven and unsustainable capitalist system that exploitspeople and ruins ecosystems. If we are to have genuine progress in the fight against climate change, social movements from around the world will have to reclaim the power andmomentum in this struggle. Grassroots mobilizations against mining, coal plants, fracking, tar sands, big dams, land grabbing, water privatization, agrofuels, GMOs, Reducing Emissions from Deforestation and Forest Degradation (REDD) are already showing the way. We need to strengthen these struggles and to connect the urgent demands of the people for food, water, health, energy, employment, rights and access with the struggles against climate change, financial speculation, land grabbing, neoliberal free trade and investment agreements, impunity of transnational corporations (TNCs), criminalization of migrants and refugees, patriarchy and violence against women, austerity measures and social security cuts.

We also need a collective and gradual transformation from the fossil fuel-addicted system of consumption and production towards a low carbon society. This also requires a transformation of the unsustainable capitalist system. Social movements already have many of these transformative proposals and solutions in their hands. Alternatives like food sovereignty, agro-ecology and several others are already being practiced and further developed. If we are to harmoniously co-exist with Nature, we need to abandon the anthropocentric vision of capitalism and recognize that we are only one component of nature and that in order to live a healthy life we need to respect the vital cycles, the integrity, the interdependence of nature by recognizing and upholding the rights of Mother Earth.

Humanity and Nature are standing at a precipice. But it is not too late. We know what needs to be done, and if we do it together, we can change the system.

Focus on the Global South

KRuHA-Indonesia (People’s coalition for the right to water)

Sustainable Alternatives for the Advancement of Mindanao (SALAM)