Home » Europe, No to privatisation of European dairy policy 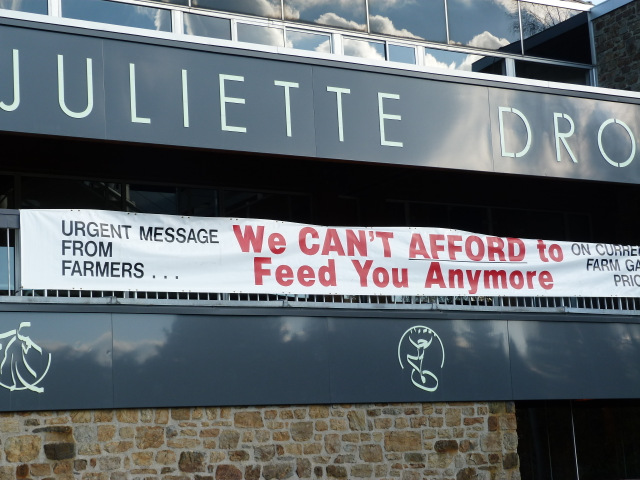 (Fougères, 29th November 2012) .At the conference on European dairy policy organised by the Confédération Paysanne and the European Coordination Via Campesina (ECVC), the ECVC, the EMB (European Milk Board) and FFE (Fairness for Farmers in Europe) issued the following statement: Farmers do not want to produce more for less. A healthy dairy economy cannot be based on selling at a loss (selling milk at less than the cost of production).  No to privatisation of European dairy policy (through contracts). Supply management is essential for maintaining sustainable pan-European milk production on family farms.

Instead of solving the problems faced by European dairy farmers, the milk package adopted by the EU earlier this year has left farmers at the mercy of the processing industry.

Without supply management, producers and producer organisations will not be able to increase their market power. If too much milk is produced, prices will remain low.

Contracts that do not take production costs into account will benefit industry, not farmers.

Encouraging European farmers to believe that their future lies in the export market is delusional. Industry and retailers are primarily interested in benefitting from cheaper milk. Farmers do not want to produce more for less. It must be recognised that the EU is already producing surplus and has to import a significant quantity of inputs to sustain these exports.

Instead, European market supply should be prioritised and there should be an end to all exporting at prices below European production costs.

To put an end to farmers selling at a loss, we propose that a price corridor be established around the average cost of production. Milk production can be increased or decreased to ensure prices continue to fall within this corridor.

We urgently need effective EU legislation so that farmers, the weak link in the dairy chain, are not left to the mercy of companies upstream or downstream.

We support the farmers’ protests this week in Brussels and Galicia. These farmers are fighting for their right to fair prices and to carry on farming.