Home » Speech by La Via Campesina delegation in the closing ceremony of International Year of Family Farming, Manila, Philippines 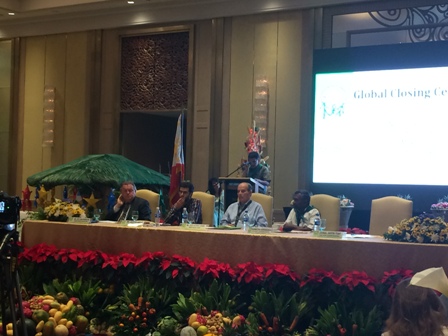 I take the floor on behalf of La Via Campesina, the world’s largest movement of family farmers, Indigenous people, fisher folks and small scale food producers. All over the world peasants, small scale producers continue to grow and distribute healthy food in their communities and feeding the world. They are indeed the family farmers that feed over 75% of the world population. And it is very important that the International Year of family farming allowed us to increase the attention to this important and crucial sector.

This is in stark contrast to the commercial food industry, whose priorities are profit and speculation and whose strategy is to make agriculture increasingly dependent on agro-toxics and inputs controlled by the corporates, increasing their profits through the sale of toxic chemicals and inputs which is responsible for the destruction of natural resources and peasant based food production and family farming.

We have witnessed a profound food crisis, which has brought attention to peasant based food production and the eradication of hunger within the UN’s agenda. The UN has recognised the crucial role that women and men peasants play in this arduous task.

During this International Year of Family Farming, La Vía Campesina offers policy proposals within the framework of Food Sovereignty, constructed by small farmers. The term ‘family farming’ is vast, and may include almost any agricultural model of food production. It includes both small-scale and large-scale producers (with farms covering thousands of hectares), as well as small-scale producers who are entirely dependent on the private sector, through contract farming or other forms of economic exploitation, promoted though concepts such as “The value chain”. This is why La Vía Campesina defends family farming in terms of peasant based, agroecological farming, as opposed to the large-scale, industrial, toxic farming of agribusinesses, which expel and Kills peasants and small farmers and grab the world’s lands.

During this UN International year of Farming, We would like to draw the attention of this international forum to take serious note of Family farmer’s suicides all over the world with particular reference to India where close to 300,000 farmers since 1995 to this date have committed suicide due to severe agrarian crisis. The country sides of India has become grave yard of farmers suicide due to increased corporate control of the farming and destructive market forces facilitated by WTO and free trade agreements(FTAs) and lack of state protection to peasant farming. Rapid Land acquisition in India and different forms of land transfers all over the world with reference to Africa and Latin America for Industrial purposes and Industrial agricultural will make millions of peasant farmers landless and their livelihood under serious threat.

All over the world with particular reference Thailand which is under authoritarian military rule, indigenous people and forest dwellers are being evicted or under the constant threat of eviction which need to be stopped immediately. Forest should be no place for corporates and industries.

During this UN International Year of family Farming, we also have to recognize that many of our fellow farmers suffer under the criminalization of their just struggles. In many cases they are repressed and again in 2014 many of our leaders became victim of brutal repression and even were killed in conflicts over land and territories with large investors and transnational corporations that want to kick us out of the land, destroy our livelihoods and turn us into rural poor.

During this International Year of Family Farming many debates and discussions have taken place. We know the importance of this sector, we know the problems they face and we also know what policies are needed to strengthen this sector.

We appreciate the engagement of the international institutions, national governments and Civil Society actors in this area. But now the time has come to implement the necessary policies and make the resources available that are needed to strengthen and support family farming.

La Via Campesina proposes the following policies to strengthen the family farming:

It is crucial that national governments take up this challenge, that they take initiatives to stop land grabbing, the grabbing of water and seeds; that they promote policies which guarantee Food Sovereignty, biodiversity and peasants’ seeds, and that they improve access to land and water; that they recognise peasant rights regarding the production, reproduction and exchange of their traditional seeds, guarantees of agro-biodiversity and peasants’ autonomy; and that they increase the support and public investments for peasant based production, and guarantee markets and equitable trade.

We urge governments to apply the Guidelines on Responsible Governance of Tenure of Land, Fisheries and Forests, and other key decisions from the Committee on World Food Security (CFS), and that they adopt the UN Declaration of Peasants’ Rights. Additionally, we urge that they implement the International Treaty on Plant Genetic Resources for Food and Agriculture, and that they stop negotiations for any new commercial agreements, particularly the TTIP (Trans-Atlantic Trade and Investment Partnership) or the TPP (Trans-Pacific Partnership) as these destroy and undermine peasant based food production.

In the coming years we have to continue to work in this direction. We have to work towards food sovereignty, toward a way of production that will generate employment, provide healthy food, and respect natural resources. We call for the creation of an alliance between countryside and city, that it might revive the peasants’ dignity and highlight their great contribution to food production; we need important political changes, both for our tables and for our fields. And we call upon national governments and international institutions to take up their responsibility and support this import challenge.