We continue organizing, mobilizing, and building alternatives to redress the climate crisis and defend Mother Earth. 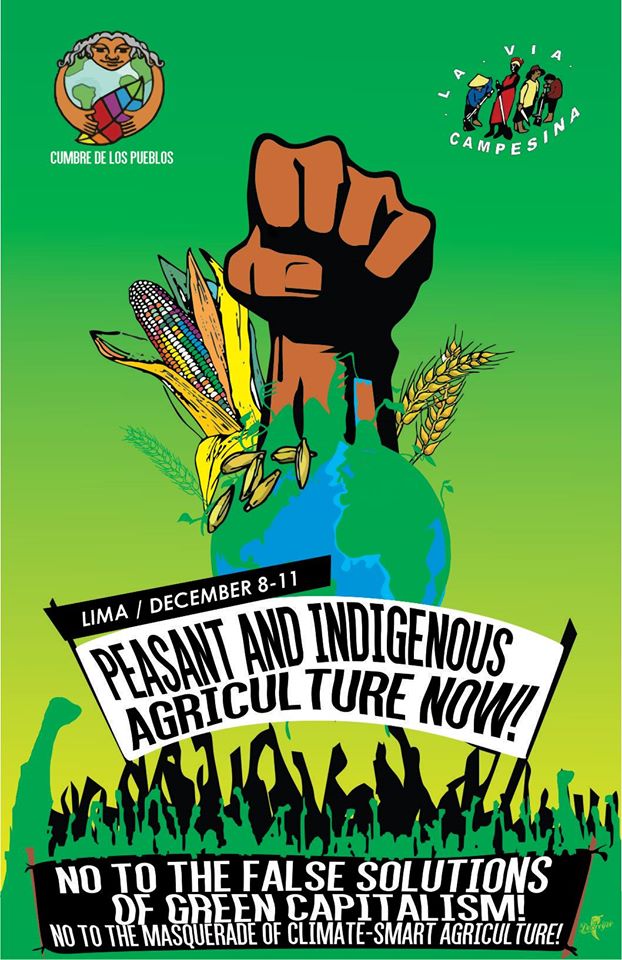 We, La Vía Campesina, indigenous people, small farmers, youth, migrants, rural workers, agricultural day laborers, fisherfolk, artisans, alongside our allies in the struggle for profound social transformations, are coming together in Lima for the COP 20 to reiterate once again our commitment to feeding the people of the world, to organizing, mobilizing, struggling and building alternatives that cool down the planet, not just for our own benefit but for all those who share Mother Earth.

Very recently, civil society witnessed again how the people of the world continue defending ourselves and rejecting the false solutions of capital and its institutions who claim to take us into account. With 2014 being International Year of Family Farming, the World Bank and its allies in the United Nations (UN) tried selling the world what they termed “Climate-Smart Agriculture” as some sort of new product that would put the brakes on the climate crisis once and for all. However, on the streets of New York and within the Climate Summit itself, we unmasked this fallacy and informed public opinion what “Climate-Smart Agriculture” is all about: more industrial agriculture, more World Bank financing and support for the capital of the few, more contamination and plundering of natural resources, more exploitation of lands, territories, peoples and workers. Above all else, it is part of the same green economy proposal based on less justice and less ecology.

In the United States of Sandy (2012) and Katrina (2005) – where the poor suffer most the intensification of each hurricane, flood, drought, and forest fire – we added our voice as organized small farmers, blacks, indigenous, migrants, fisherfolk, women and youth to the largest street demonstrations in the history of climate change. There, once again, we demanded: Environmental and Climate Justice Now!

Before New York, we were in Venezuela for the Social PreCOP Meetings of 2014. There, we contributed to the Margarita Declaration which was later submitted to government representatives from 40 nations, including the countries that make up the Bolivarian Alternative for the People of the Americas (ALBA). Those countries that share our perspective will be taking the PreCOP message to the formal Conference of the Parts (COP 20) in Lima, Peru, and will be supported in the streets by our Peruvian organizations and their local, national, regional, and international allies.

We will be mobilized on the streets of Lima to participate in the People’s Summit on Climate Change, raising our voices as we did in Rio (2012), Durban (2011), and Cancun (2010), and will demand that as part of the preparations of a draft for the first binding agreement since Kyoto – to be signed in December 2015 during the COP 21 in Paris, France – that all signatory states fulfill their commitments and promises to reduce carbon emissions and global warming to 2 degrees, as has been recommended by the scientific community in order to avoid a climate debacle of catastrophic proportions.

Summits come and summits go, each with its own historical weight and significance, while we in La Vía Campesina continue to build the social base necessary to achieve our principal demand – food sovereignty, the recognition and protection of our people, our lands, our territories, and an end to all attempts at privatizing humanity’s commons. In addition, we make special mention here of the increase in forced migrations caused by the climate crisis. If there is one thing that truly symbolizes the human tragedy of climate change, it is the roughly 50 million human beings that today live between the countries that expelled them, and the nations that reject them.

Present in Peru, we reiterate:

Once again we present our proposals, in contrast to the false solutions sold by the culprits of the climate crisis. In Peru, as we have done in other COP Summits, we affirm:

We of La Vía Campesina, small family farmers, landless workers, indigenous and migrant communities – men and women – stand in direct opposition to the commodification of nature, of our territories, of water, seeds, foods, and human life. We reiterate what we said at the People’s Summit of Cochabamba, Bolivia: “Humanity is facing an historic decision – we can continue along the path that capitalism created, based on predation and death, or set about on the path of harmony with nature and a respect for life”.

We repudiate and denounce the green economy as one more masked attempt to cover up increased corporate coveting and food imperialism across the globe. It is a brutal way for capitalism to try washing its hands, and offers nothing but false solutions such as “climate-smart agriculture”, carbon trading, REDD, geoengineering, transgenics, agrofuels, biocarbon, among other market solutions to the environmental crisis.

Our challenge is to reestablish another way of relating to nature, and between peoples. This is our right and responsibility, and for this reason we will continue the struggle to do so, calling on all people to keep up the endless fight for food sovereignty, for integral agrarian reforms, for the return of territories to indigenous people, for an end to capital’s violence, and to restore agroecological small farmer and indigenous food systems.

NO TO THE FALSE SOLUTIONS OF GREEN CAPITALISM!