Contribution of the European Coordination Via Campesina to the Open-ended intergovernmental working group on a United Nations declaration on the rights of peasants and other people working in rural areas. 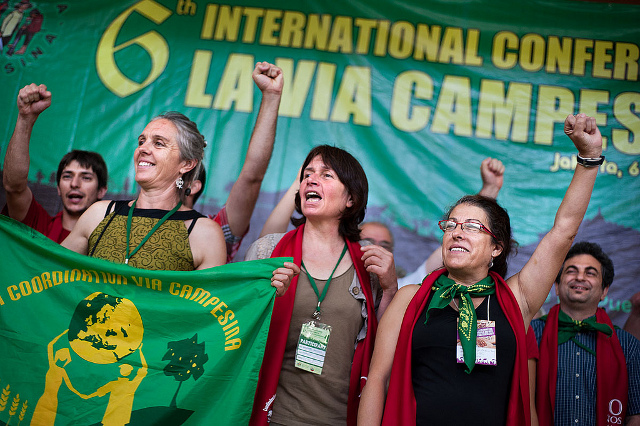 The CAP, a European specificity
(Geneva, July 15, 2013) The European Union has the distinction of having over 50 years of a strong Common Agriculture Policy. Implemented in the 60s, it was initially meant to ensure food bself-sufficiency of the people. This was achieved by ensuring to farmers remunerative prices for the main products, by protecting the domestic market. This pricing policy was accompanied by a modernization of agriculture, with restructuring and facilities for older farmers to leave the land to younger farmers.

The principles of this policy have changed dramatically in the 90s with the creation of the WTO, globalization and the implementation of neo-liberal policies. Prices should be aligned with world prices and thus provide the food industry with cheap raw materials.

To compensate for these low prices, subsidies were granted to farmers, according to the number of hectares planted”. Thus over 50% of European producers receive less than € 500 per year, while those receiving more than € 100,000 are only a few thousands.(1)
We saw settle the key word of the current European policy COMPETITIVENESS
It should be noted the influence of agro-food companies in this process.

Consequences
– Europe has actually achieved food self-sufficiency in the 70s, but this self-sufficiency is now declining as a result of liberal policies.
– But one of the main consequences is the continuing loss of farmers and farms for decades.
In France, for example,it fell from 2.6 millions farms in the 50s to less than 500,000 today
while the number of farmers fell from over 6 millions (30% of the active population) to less than one million. This is the same mechanism in EU-27 where 20% of farms have disappeared between 2003 and 2010 wirh 11 millions farms today for 500 million European citizens.
It has a strong negative impact on employment, while there are more than 10% unemployed people in Europe and even 20 or 25% in several countries in crisis.
– It is also a great source of suffering – which also affects modernized farmers, that “well followed the model” and which are heavily indebted and can no longer cope when prices fall amid growing price volatility.
In France, it is estimated that some 400 farmers commit suicide every year
– Producers will tend to increase the pressure on the low-paid employees, many of whom are migrants, forced from their farms and villages in other European countries (Romania, Poland ..) by poverty.
– The expansion of farms, permanent objective of competitiveness make it difficult to work well – less diversity of cultures, fewer rotations, loss of livestock, no return of organic matter, destruction of hedges .. . are some aspects of these damaging practices.
– The quality and diversity of products decrease with greater standardization of products related to the dominance of supermarkets on the food distribution. We often find higher quality (AOC, etc.) in disadvantaged areas and mountain areas. This is compounded by all the rules and constraints to reproduce or marketing of farmers’ seeds.
– Finally it makes it difficult to install youth – Due to the small number of farmers, their children (who don’t all want to stay on the farm) are not sufficient to renew the farm population – There are many young people who want to settle as farmer, but it is very difficult to find and acquire land, often due to the strong competition from established farmers who operate large surfaces and get high amount of subsidies. There is also the artificialization of land (urbanization, …) which increases the land problem.

A model that is exported, at the expense of farmers

The integration of new countries in the enlargement process means adopting the operating rules of the EU.
The example of Croatia, which joined the EU on the 1st of July is particularly striking. It was promised farmers better access to Western European markets and higher incomes. In fact, the products from Germany or France are flooding supermarkets, while local products are struggling to gain access to markets. The question of the fate of small farmers is not taken into account. As it has been the case over decades of agricultural policy, they must “adapt” or disappear, and for many of them to adapt AND disappear. In milk production, the need to adapt to new standards has lead farmers to debts. On top of that, the french multinational Lactalis has bought a large part of the dairy industry, and has brought down the price of milk while small producers are not collected. As a result thousands of Croatian producers ceased milk production over the past months, and dependence increases with respect to food imports.

For ECVC, problems that farmers face in North and South have the same root causes.

These considerations lead us to consider that specific rights for peasants are also important for European farmers.They are important to stop this continuing loss and this would bring support, and important protection to this disrepute category of people.

Some positive concluding remarks
We observed some interesting elements in the European Union recently:
In the proposed new agricultural policy currently under negotiation, has emerged the term “small farms” opening benefit from specific measures. If those are debatable, the fact that these farms are appointed is an encouraging sign
the European Union is committed with specific events to the International Year ofFamily farming launched in 2014 under the auspices of the UN.
Finally, the Confederation paysanne considered a great victory to have rehabilitated the term Paysan in France. This word, very undervalued a few decades ago, is now used with pride by all farmers, including the most intensive ones.

(1) This subsidy scheme also allows the European Union to export products at dumping prices and undermines local production and farmers in other countries.

Geneviève Savigny, member of the Confédération Paysanne – France and of the Coordinating Committee of the European Coordination Via Campesina