Home » Southern Africa: Peasant’s social movements and the rural women assembly at the SADC Peoples´ Summit – Heads of States are on the wrong direction!

Rural Women Assembly, Via Campesina and the Peoples’ Dialogue 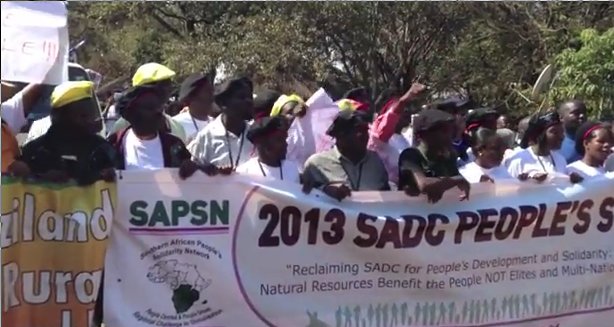 Lilongwe, 12 August 2013 – Hundreds of people from social movements and grassroots organizations, including small-scale farmers, farm workers, rural women and social activists from the SADC countries, have joined a caravan towards Lilongwe, Malawi, to participate at the alternative SADC peoples’ summit, that will take place this week, from 16 to 17 August, 2013.

Social movements such as Via Campesina, the Rural Women Assembly and the Peoples’ Dialogue will converge at the same space for a people to people dialogue to build alternatives and propose another regionalism that is based on the peoples´ perspectives.

The southern African region is faced with ongoing challenges and deepening crisis as a consequence of neo-liberal economic policies. Elite and transnational corporate capture and control of people’s basic means of production (land, water, seed, etc) is escalating. Natural resources are increasingly being privatised due to the myriad of investment agreements our governments have entered into with corporations, western governments and the “new comers” emerging economies from the South, like the BRICS.

Land has been massively grabbed in almost all SADC countries and the agribusiness model is destroying peasant-family agriculture, the only proven sustainable and ecologically friendly model and that can produce the most of food for SADC countries.

In recent years we have not seen a great deal of progress in the SADC region. In fact, the SADC region suffers from a food production deficit. We see greater levels of poverty and unemployment as result of the inappropriate development models that are export led, based on extractivism, guided by the “dig it up” and “ship it out” model. An increased dumping has elbowed out small farmers from the markets, thus destroying their livelihoods. Mega projects, particularly hydro-electrical and bio-fuel plantation projects have displaced and dispersed communities, and are aimed at facilitating these inappropriate models of development.

We need to fight for peoples’ livelihoods, which will benefit the home market, organically linked to agriculture and manufacturing industries. This will create jobs not only for the urbanites but also for the rural communities and allow an equitable development within the SADC countries. The SADC people need to be free to self determine their destiny in all spheres of life (social, political and economical).

The social movements of the region have concluded that the decisions that would benefit the people, taken by the Head of States, are not being implemented at all. For instance, the 2008 Maputo Declaration, in which African governments committed to spend 10 percent of their annual budgets to support small-scale farmers to develop their agriculture, is far from being a reality in most or all of SADC countries. Instead, we see SADC been influenced by South African’s commercial agricultural model based in cash crops for the export, undermining local market development in South Africa and the rest of the region. These meetings should be guided by popular democracy, not by elected individuals, if they to benefit the SADC masses.

According to Renaldo Chingore João, member of the Mozambican National Union of Peasants (UNAC) and a leader of the International Peasants Movement, La Via Campesina, “its important to mobilize and build alternatives in parallel to the Heads of States of SADC because we have proven to have most of the solutions for the multi-crisis in the region. Food Sovereignty, to give an example, is a paradigm that must definitely be implemented by the Governments of the region”, he said.

Food sovereignty is vital to feed the world, employ people and protect the environment.

In Lilongwe, social movements will also have a teach-in on various important themes, such as taking forward the food sovereignty agenda, discussing the Comprehensive Africa Agriculture Development Programme (CAADP), critiquing the Green Revolution and AGRA, and explaining how extractivism destroys forests, over- exploitation of minerals, contaminates the water and facilitates grabs land. This will help build a consciousness within a broader constituency, which will be the locomotive of our struggle for popular sovereignty, popular livelihoods and popular democracy.

Mercia Andrews, from the Rural Women Assembly, calls on the SADC Head of States and government to “ build a SADC informed by the real needs of the people and not in the interests of the TNCs that demand concessions in turn for investment. We need a model of development that puts the interests of people first. We cannot continue with a model that destroys nature and depletes our resources. We also say we have answers”.