Home » Social Movements conference in Jakarta: “We want WB and IMF out of our lands” 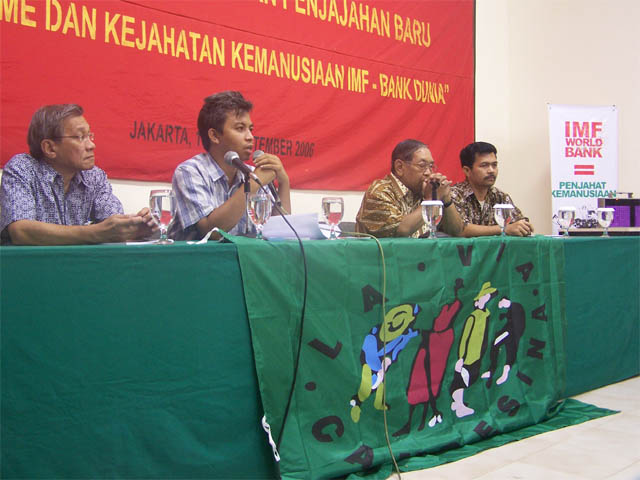 Today in Jakarta farmers leaders from the international peasants’ movement La Via Campesina concluded a 3-day conference with other Indonesian social movements denouncing the IMF and WB crimes against humanity and proposing people’s alternatives.

<Gus Dur, former president of Indonesia and Walden Bello, executive director of   the Bangkok based NGO Focus on the Global South, addressed the conference. Gus Dur said that globalization had entered our lives and that people had to find different ways to deal with this. “You have taken the path of resistance and I respect that”, he said to the movements’ representatives.

Walden Bello, explained how the World Bank and the IMF policies had created more poverty and suffering, especially in Indonesia: “During the Asia financial crisis, Indonesia was the most hardly hit country. As a result, 22 million people went under the poverty line (under 1 US a day), out of 40 million across Asia”. “IMF and the WB should be taken to international criminal courts for their systematic abuses of human rights!” he added.

At the closing press conference, Henry Saragih, General coordinator of La Via Campesina said: ” We want the WB and the IMF out of our countries in order to develop food sovereignty and genuine agrarian reform. Our movement gathers more than 130 peasants’ organizations all around the world. We are among the first victims of the WB/IMF policies and we now want to determine our own alternatives policies that would benefit the society as a whole”.

Badrul Alam, leader of Bangladesh Krishok Federation, explained that the World Bank was imposing policies on the Bangladesh government in the name of development. “Actually, we have observed that those policies were only benefiting a few people. More over, they are encouraging corruption within the government” he added.

Debora da Silva from the Brazil landless movement (MST) said that even though Brazil was a rich country, millions of people were hungry. “The World Bank policies have contributed to create poverty in my country”, she said. She denounced the repression of social movements opposing criminal policies: “In our struggle for land and social justice, many people were killed”, said da Silva.

Via Campesina and many international and national movements will join the mass rally tomorrow, 18 September:   Start 11 am at Lapangan Banten, in front of Hotel Bandung. The Rally goes to the Presidential Palace and then to the World Bank office (Jl Jend Sudirman, Gedung Bursa Efek Jakarta – BEJ)