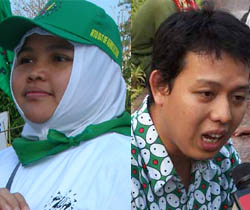 On Sept 17, Achmad Yakub and Irma Yanni of Federasi Serikat Petani Indonesia (FSPI – Federation of Indonesian Peasant Union) flew to Singapore to organize a Via Campesina press conference on the World Bank and the IMF They arrived at Changi Airport at 5 PM local time. When they submitted their passport at the immigration  desk, the officer brought them to the office for interview.

They have not been released so far (Sept 18, 6 am) – more than 12 hours after their arrest. They were not doing anything illegal and it is not any clear why the Singapore Authorities are detaining them. At 1 am, they informed us that they were only given water and bread.

“It’s unacceptable that the representatives of a peaceful peasant movement planning to expose how the World Bank and the IMF are destroying their lives are not allowed to do it” said Henry Saragih – General Secretary of FSPI and General Coordinator of La Via Campesina. “We condemn this action taken by the Singapore Authorities. They should immediately release our friends and allow the people to express their concerns”, he added.

Farmer’s movements are opposing World Bank and IMF because of their disastrous impact on small farmer’s lives. The IMF’s responsibility in the crisis in Asia (1997) and in Argentina (2002) has attracted international outcry. But peasants groups are also blaming the Fund and the Bank for a wide range of other policies and projects.

The WB is promoting “the market assisted land reform” leading to privatization of land markets. It considers land as a commodity and not as a source of livelihood, culture and community life that has to be protected. Farmers around the world are now suffering from those policies supposed to support them. A large scale research conducted in Brazil in 2005 shows that landless peasants accessing the WB scheme have become heavily indebted and have not found a way out of poverty (1).

Besides this, conditions attached to the IMF and WB loans to developing countries force them to open their markets and to privatize public services such as water and education. In Indonesia, for example, it is under the IMF’s pressure that the Soeharto dictatorship started importing rice in 1998. Indonesian farmers produce enough rice to feed the whole country’s population and rice imports make them lose their own markets and livelihoods.

In Sri Lanka, the World Bank and the Asian Development Bank compelled the government to cut subsidies on fertilisers and seeds, privatise state fertiliser manufacturing industries and seed farms, sell off stores, mills and retail outlets. They have also made tireless attempts to introduce charges for irrigation water and to remove restrictions on the lease and sale of land given to farmers under government grants. This has led to a deep crisis in the paddy sector. (2)

In many countries, WB funded projects (infrastructure, large dams…) have evicted rural communities from their land, benefiting transnational companies and marginalising local communities. Meanwhile, those policies have pushed those countries into massive debt. For decades, peasants and indegenous communities have opposed mega projects funded by the World Bank such as Pak Mon Dam in Thailand, Bakun Dam in Malaysia, and Kedung Ombo Dam in Indonesia.

The IMF and the World Bank have now become so unpopular that they can not guarantee that people’s voices are heard at their annual gathering. La Via Campesina, that represents millions of farmers all around the world, is calling for the World Bank and IMF to close down. It is time to set up institutions and policies that respect people voices, rights and lives.

(1) Evaluation of the WB’s Rural Porgrams in Brazil, Maria Luisa Mendonça (2006)
(2)  IFI interventions in the paddy and rice sector in Sri Lanka, MONLAR (2006)