Home » Paraguay: support to the victims of the Marina Kue slaughter 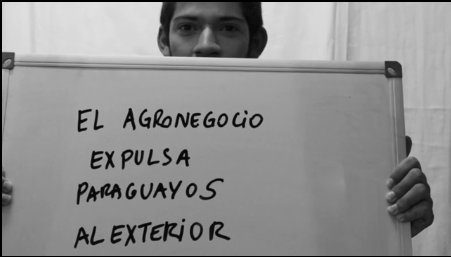 (Asuncion, July 15th, 2013). The international delegation of the Coordinadora Latinoamericana de Organizaciones del Campo (CLOC) and La Vía Campesina present our entire support to the victims of Marine Kue; survivors, families and those who have been deprived of their liberty or suffer an imputation from the framework of the fiscal investigation.

We adhereto the requests made by the Committee of Relatives of Victims of the Marina Kue Slaughter, the Comision Sin Tierras of Marina Kue, the Articulacion Curuguaty and CLOC-Via Campesina Paraguay, in terms of:

-The immediate release of all political prisoners

-the return of the Marina Kue lands

-compensation of the victims and their families

-trial and punishment to the ones really responsible for the killings

In accordance with the statement of the “Motion of solidarity with the people of Paraguay” that will be passed during the 6th International Conference of La Via Campesina, in Indonesia, we argue that the structural problems that are discussed in Paraguay will only find a definite solution with a comprehensive agrarian reform policy as social movements pose with a state capable of solving the situation of ill-gotten lands, foreign ownership of land, the dispossession of indigenous territories and grabbing by transnational agribusiness.

Lets not forget what weighs on this de facto government stigma of social injustice, noted even from the International Human Rights Commission of the UN, which has been constrained to amend the irregularities of the Curuguaty Case that arise in the course of the official investigation, hiding irrefutable evidence that guide towards truth and ignoring allegations of torture and cruel, inhuman and degrading treatment of political prisoners and extrajudicial killings on the day of the slaughter.

We struggled because in Paraguay, as elsewhere in Latin America, to consider full respect for human rights and to guarantee procedural justice mechanism, because there are sufficient facts of criminalization to the social struggle, of impunity towards the death of popular fighters and persecution for the cause of the oppressed. If the decision adopted by a people is to resist and stand against those who create misery and hunger, be it known that their struggle will not be isolated or in distress, but it will add to all a universal movement that stands up to share their walking, especially against the hegemonic model that pervades rural lands and indigenous villages through agribusiness and extractive, leaving behind utter desolation.

Our mission as CLOC-Via Campesina is, precisely, to support the social and political actions that organized people make in relation to the Curuguaty Slaughter, for his clarification and impartial deliberation in the courts.

17 people have lost their lives in Marina Kue, land belonging to the Paraguayan State and intended for land reform, June 15, 2012. Justice also died that day. Our hope is that she is revived through this preliminary hearing we have come to join in active solidarity and internationalist.

Globalize the struggle! Globalize the hope!
For the land and sovereignty of our peoples! With solidarity and struggle!
For land, justice and freedom!