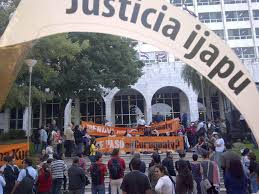 Yesterday, during the morning of July 30th, 2,000 acres of Marina Kue were occupied again by a hundred farmers, demanding that the state give the land as part of land reform. They are located in the district of Yby Pytá, department of Canindeyú. This territory was protagonist of the Slaughter of Curuguaty, where 11 farmers and 6 policemen were killed in June 2012, and led a week later to an institutional coup against Fernando Lugo. In addition, they demand that charges be dropped and the peasants detained be release due to the clashes in Curuguaty.

There are about 200 police officers on site, including elite troops, under the direction of the zonal police chief, Atilio Ferreira, and representatives of the Paraguayan justice, but without any order or court document.

The repressive forces of Paraguay are setting fire to the belongings of the families that are settled. Previously, because of the police attacks and the threats of arrest and prosecution if they do not leave, the communities that occupied Marina Kuedecided to withdraw from the place.

Yesterday morning, they peacefully re-entered to maintain a permanent camp to get what they claim.

It is noteworthy that the national authorities confirmed more than once that the land in Marina Kue belongs to the Paraguayan State and are not to the company Campos Morumbi, in opposition of what the General Attorney of Paraguay alleges, demonstrating their obvious complicity with the landowners. The lands, considered by the Paraguayan peasants as ill gotten lands, are in protracted litigation between the Campos Morombí Company, owned by the family of Blas N. Riquelme, after the donation of the National State Armed Forces to the Federal Government in 2004, in order to be destined for land reform.

Marina Kue families dream with the recovery of 2000 acres of land, to make it a model settlement, so they can sustain themselves and produce. They are not going to stop their fight for the non prosecution and freedom of the accused and imprisoned, and for the investigation and punishment of those responsible in planning of the Curuguaty Slaughter.