India is being cornered to open up its markets at the ongoing negotiations of the Regional Comprehensive Economic Partnership (RCEP) – a free trade agreement between 16 Asian countries, including massive manufacturers like China.

RCEP will bring down import duties to zero on goods, both agricultural and industrial, for more than 92 per cent of tariff lines. Being the world’s largest trade agreement, it will impact half of the world’s population including 420 million small family farms that produce 80 per cent of Asia’s food.

India would be forced to allow cheap imports,which will pull down local prices and potentially destroy livelihoods of local manufacturers and farmers. Global agribusiness giants have eyed India’s markets for long thanks to its enormous size and unorganised nature.

Foreign dairy companies have been struggling to open up India’s small farmer dominant dairy sector through free trade agreements- be it the European Union- India free trade agreement or the RCEP. Thanks to a virtual saturation of industrial country dairy markets, and high subsidies that their agribusiness receives, they now look to dump their cheap dairy products in India, a country with high dairy consumption.

Indian farmers are rejecting such a deal given that dairy is a pillar of farmers livelihoods, and poor incomes have been the bane of farmers in India for long. Rising debt and suicides have turned into an electoral game for political parties, including the current Prime Minister Mr. Narendra Modi, who won the 2014 election on the promise of increasing the procurement price and later ignoring them after he came to power. Nevertheless, it is India’s poor farmers who have themselves been subsidising cheap food for consumers by bearing higher production costs which have risen with inflation across decades, while their incomes in a cash economy have fallen.

Unfair prices have brought things to a tipping point. Indian farmers have shown that they are fed up by time and again dumping produce and pouring out milk on the streets.

Farmers are rising up against Modi’s false promises and have faced violent repression. Five farmers were shot dead by the police in Mandsaur in August during protest against unfair prices. Recently, in Rajasthan, Sikar, local government forcefully cut all Internet services because of fears of the growing farmers’ agitation against unfair farm prices there. Reports by the governments own National Commission of Farmers chaired by MS Swaminathan, to look into India’s agrarian distress and rising farmers suicides, recommended that India must provide agricultural support prices at the rate of 50 per cent over the cost of agriculture production. 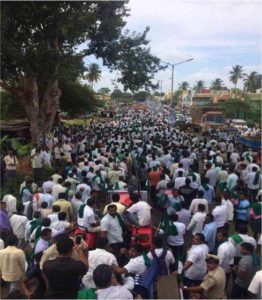 Farmers of the Karnataka Farmers movement (KRRS) mobilise against unfair prices as part of the Kisan Mukti Yatra (Farmers Free-dom Caravan) who are gearing up for New Delhi on Nov 20 this year
Photo by: Swaraj Abhiyan

At the moment, even the state support prices offered for only select crops– the Minimum Support Price (MSP) falls way below production costs. This has been the key demand of farmers movements across the country, including of a recent “farmers freedom caravan” – Kisan Mukti Caravan, that mobilized more than 175 farmers organizations of diverse ideologies and leanings in North and South India. They will have a massive rally on November 20 in New Delhi to not just shake the government, but also move the conscience of society, who must now support its farmers to whom it owes a debt.

Many years ago, India’s beloved Mahatma Gandhi said India needs production by the masses, not mass production. At least one of India’s agriculture sectors – national cooperative dairy, managed to create a model that fulfilled Gandhi’s dream. It provides a livelihood to 150 million farmers. Small farmers, many women, came together in a federated three-tiered cooperative model, and are able to sell milk, even if only one litre, to the cooperative which aggregates and markets it throughout the country.

This bottom-up cooperative model created India’s popular national milk brands like Amul along with over 170,000 milk cooperatives (NDDB, 2016). This was a low-input low-output model, yet it helped to quadruple India’s milk production, bringing it to the top position globally, while also supporting the livelihoods of millions. For rural women, owning livestock is like having insurance scheme and stable source of precious daily income and food for the family.

Corporations like New Zealand dairy giant Fonterra – the world’s biggest dairy exporter – is now looking to RCEP as a way in to India’s massive dairy market. It has openly stated that RCEP would give the company important leverage to open up key markets that are currently protected such as India’s, where it would go head to head with India’s dairy cooperative Amul. As a result, many people fear that Indian dairy farmers will either have to work for Fonterra or go out of business. They will not be able to compete.

The general tendency of the rise of private dairy in India has led to a hyper-competitive environment where both private players and the dairy cooperatives have engaged in price wars to capture markets. The end result for farmers has been rock bottom milk prices. In fact, the private sector is fast growing in India. Industry sources claim that it took the private sector just 20 years to surpass the market share acquired by the dairy cooperative sector over nearly half a century.

While Australia and New Zealand could gain entry to dump their commodities in India, other RCEP members like Japan and Australia use food safety standards to block imports from small-scale dairy producers in developing countries like India.

RCEP will add to long list of free trade agreements that has helped boost the growth of animal factory farms like Fonterra’s. These factory farms where they confine more than 1000 animals in a concentrated space where they are unable to move freely, account for 80 per cent of the growth of global meat and dairy in recent years. Industrial meat and dairy productions is based on the highly concentrated production of cheap meat and powdered milk surpluses, which are traded as global commodities. This surplus production is what underpins the unsustainable growth of global consumption of meat and dairy—and the spectacular rise of carbon emissions.

Given such a volatile climate and understandably rising anger among farmers for repeatedly receiving the short end of the stick, the Indian government must stop the RCEP from destroying rural livelihoods.

Ashlesha Khadse is a member ofLa Via Campesina in India, and media officer for Global Forest Coalition. GRAIN is a small international non-profit organisation that works to support small farmers and social movements in their struggles for community-controlled and biodiversity-based food system. This article first appeared in Counter Currents