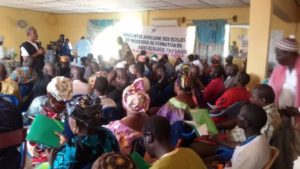 Ten years ago, we were here for the World Forum on Food Sovereignty, Nyéléni 2007, which brought together social movements and peasant organisations from 5 continents, among them La Via Campesina, Friends of the Earth International, the World March of Women, fisherfolk, pastoralists, indigenous peoples, and the International Planning Committee for Food Sovereignty. We adopted the Nyéléni Declaration, which defined food sovereignty as the right of peoples to healthy and culturally appropriate food produced through ecologically sound and sustainable methods, and their right to define their own food and agriculture systems. This declaration fed into the six pillars of food sovereignty that guarantee the rights of peasant women and men: the right to food, the right to use and to manage their land and territory, the rights to water and seeds, the right to livestock and biodiversity. All of these should remain in the hands of those who produce food through agroecological methods based on peasants’ traditional knowledge. This was the starting point for the development of the concept of food sovereignty in many countries throughout the world, a concept that began in our communities and our territories and, as is the case in Brazil,  Nepal, Venezuela, Bolivia, Ecuador, and in the ECOWAS, Sénégal, and Mali, has reached the level of policy and legislation.

Since 2008, the multiple crises – financial, ecological, technological, food – have led to an acceleration in  land and water grabbing, and in the development of biotechnology, with GMOs and the new GMOs, which is in effect the privatisation of life by a handful of multinationals. These crises have led to increases in violence against communities and criminalisation of peasants, as well as to the expansion of the industrial agricultural and food system, which is at the origin of the climate changes that are affecting us.  At the Nyéléni Centre, which is now known as the International Centre for Training in Peasant Agroecology – Nyéléni (CIFAN) and which is run by the CNOP (the National Coordination of Peasant Organisations of Mali), we have held large-scale international forums: citizens’ juries on food and agricultural research (les espaces citoyens d’interpellation démocratique sur la gouvernance de la recherche pour l’agriculture et l’alimentation) in 2010 ; against land grabbing in November 2011 ; on peasant agroecology in February 2015. In June 2015, we unified our struggles through the Global Convergence of Land and Water Struggles in West Africa, while continuing, in synergy, to promote food sovereignty.

Today, more than 250 women and men from 24 countries and 5 continents have gathered here to review our ten years of struggle for food sovereignty and to uphold Peasant Agroecology as the strategy for reaching our goal. We have loudly and clearly reaffirmed our commitment to support the Declaration on the Rights of Peasants and Other People Working in Rural Areas that is currently being negotiated at the United Nations. We have discussed the ways to:

These 7 points are the pillars of the «Nyéléni Peasant Agroecology Manifesto», which we have adopted and which will be our guide to attaining food sovereignty.

This is the time to recall that Nyéléni was a courageous young peasant girl, an only daughter, who worked hard to feed her family and is an example for peasant communities. She is also an example for the women and young people here today, who are already very involved through the training programmes and who are going to continue to meet the challenges of attaining food sovereignty and ensuring respect for peasants’ rights – on the basis of the recommendations in our ten-year work plan which we have made a commitment to put into effect when we return to our countries.

We are inviting researchers and academicians, as well as political decision-makers, to join us in combatting the false solutions put forward by multinationals and in promoting peasant agroecology as the path to food sovereignty.